So you say I shouldn’t quit my day job to alliterate for a living. Okay. But I do some other stuff…

Compositing pictures is one of the things that I frequently do, especially for background pictures used in translites. I first began doing this without digital help. I had noticed a technique done by Ken Sawyer, my predecessor in the field, where he had taken pictures while panning his 8X10 camera in Washington, D.C. He planned ahead when he shot pans. Every place where the join was to come, especially on a building or on some recognizable scale object, he would place that spot the same distance away from the center of the picture in each of the adjoining pictures. That way the size of the object would be the same. I was a good student. I picked up his technique and kept it my secret. At least for a long time. It meant that I could enlarge one negative and then the neighbor and that they would be the right size when seamed together. Lots of other variables, darkroom reflections, contrast, density, and color, but they would be sized perfectly. Over time, as usual, everything changed.

I became more adventurous. I would really take time to study the images to see where I could turn things. And then came Pacific Heights (released in 1990). Neil Spisak designed the film. I later worked with him on Spiderman 1 and 2. For the first time I needed to make a translite that went around the corner. I figured out that I could cover the corner shot in a quick pan of a wide angle, and then set up the view toward the streets facing straight-on in a rectilinear fashion. The straight-on shot would cut off the corner. I just needed a clean sky to match. I could cover one street, the corner, and the street crossing. Pretty good feeling. I did the same thing on the translite from the Ansonia in New York City for Single White Female (1992). I believe that James Truesdale was the person from the art department with me on this one. Milena Canonero designed the film. And pretty soon I was fearless. Or at least confident.

Today’s first photo was from How to Lose a Guy in Ten Days (2003). James Feng was the New York art director for production designer Thérése DePrez. I remember being in midtown Manhattan on a floor of a building that had been gutted for renovation. We ended up having seven camera set-ups. That takes a while with 8X10. And we were shooting through glass, so we had to make sure that the cameras were looking at the reflection of black. That way the inside image would not appear in the shot. Sometimes I used black cards on the lens, other times I shrouded the camera and the window in duvetyne. The final picture worked and we even changed some of the advertising to conform to “clearances and rights”. Funny how if I shoot a billboard of a beer advert and don’t alter it, they might get litigious. But if the product placement folks make a deal, they pay the movie company money to have it appear. Helps the art department budget. And sometimes pushes the parallel products of the production company. Below is a shot of Times Square from Spiderman 1. Look for the Sony product placement. Guess what car company wanted to have you notice their new car? 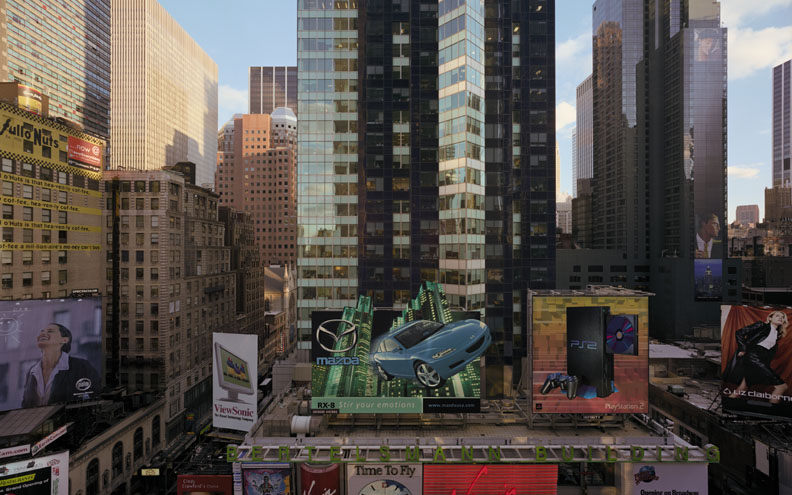 Finally I present a picture that is more recent. Adobe, maker of Photoshop, my old and improving software tool, started talking about how we could automatically compose a pan with their new tools a couple of generations ago. First time I really tried it was with CS2, if I remember. But it just would freeze up. And even CS3 was marginally better, working with smaller 8-bit color files, but really not ready for my stuff very often. CS4 got a lot better, making some very interesting assemblies, even with different styles. I started working with rectilinear builds, creating views that looked great with across the street shots straight on. I could sometimes get my full resolution files to work for five frames to make what amounted to a full 120 degree view, one-third of a circle. And when CS5 showed up, married to a really beefy Mac with lots of Random Access Memory (RAM), I could reliably count on the assembly almost all the time. I say almost, because some files would still get lost in cyber-land.
The last picture presented today did need a fair amount of clean-up after Photoshop had its turn, but does illustrate the interesting view of a spherical render. It reveals Atlanta on a pretty day, with a powerful and stately skyline. 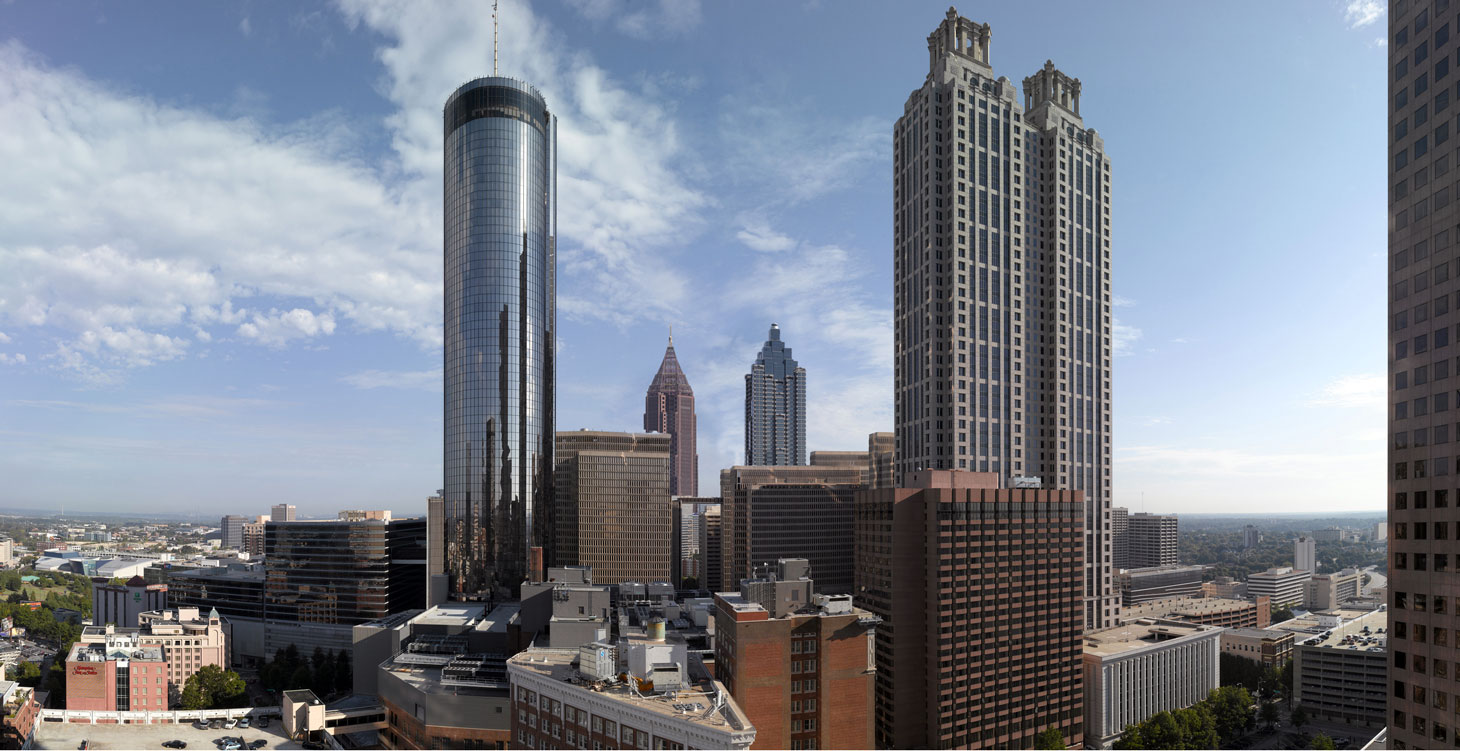