Just the house across the street…

Roaming the world with my 8X10, here outside of Frost, Minnesota

Sometimes I shoot pictures of the proverbial “house across the street.” Okay, mostly boring stuff…

It happens that a production designer wants a translite photo backing of the house just opposite the “hero” location. This can be at street level or it could be several floors up. I will show you some of these pictures today. Just ordinary stuff for the most part. But I did solve one problem along the way. You’ll see.

The first shot I will show is from St. Paul, Minnesota. One of my clients, I’m thinking it was Boyd Dumrose, at a New York soap All My Children, had requested a location that would belong to his character. He made a suggestion. “It should be the kind of a house on a street car line.” I often use Minnesota as my “back lot” for locations because people there are still friendly to film folks. They have yet to be burned and sometimes even think that what we do in Hollywood is kinda cool. I guess it can be, but the translite part is devoid of movie stars and paparrazzi. Nikke Fink and TMZ do not vie for an interview. My designer knew what he wanted and his simple description really set the tone. I actually found the house on a former streetcar line. I can’t recall if it was on Selby or Grand. This is going back a ways in time. Photoshop 3.0 had just come out. I had a bit of digital repair work to do on the house. I decided to do in in the Adobe software. Only problem was the memory requirement. I had to buy more RAM two times to get it done. I am glad it is cheaper now. 🙂 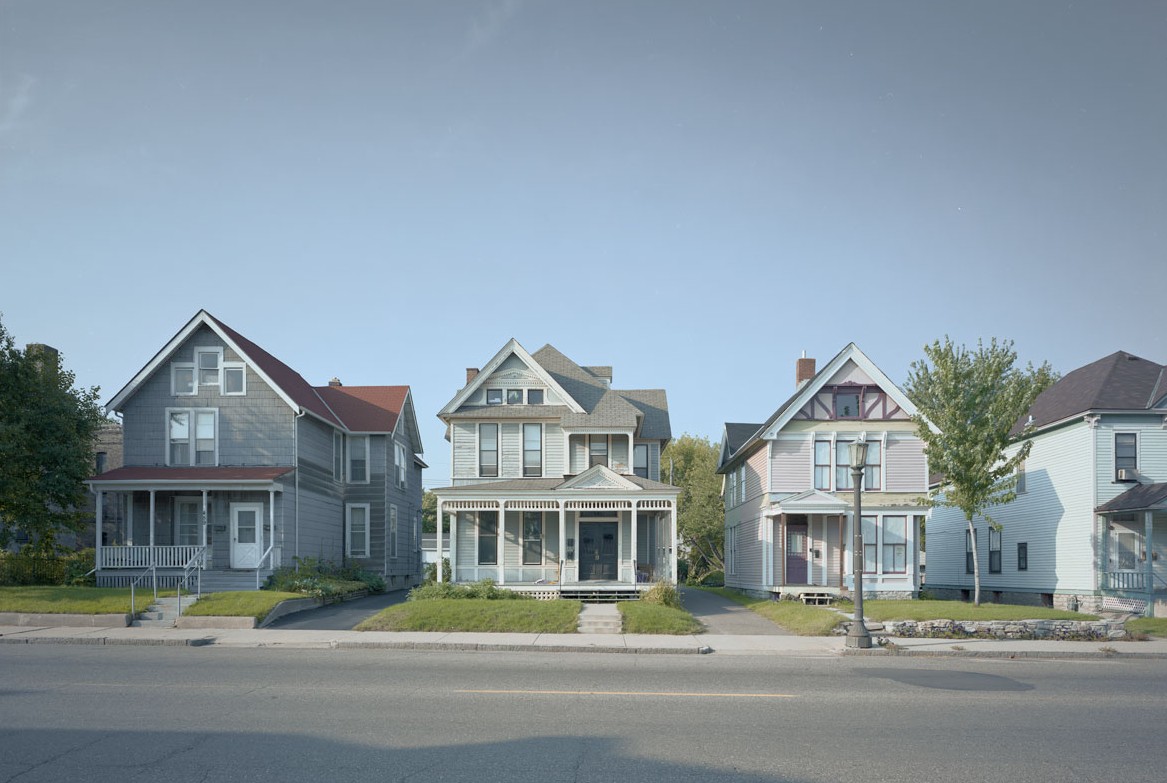 Streetcar line house tells part of the story for a soap opera.

Another house across the street scene came up in Spider-Man 3. Marko, better known as Sandman, was a character who needed to climb up to enter his daughter’s bedroom at night. Production designer Michael Riva and his supervising art director David Klassen showed me a house in a unique part of Brooklyn. New York City streets are often fairly narrow. Widths in Manhattan are often 30 or 32 feet wide, curb to curb. Sidewalks can be 6-12 feet wide as well. But this particular street was so narrow that the house was only about 27 feet from the wall of the house I was in. I decided to use digital capture for this shot. Sam Raimi, the director of the film, expressed a bit of concern when I told him about this at an accidental meeting at the door of the Essex House, but I assured him that I had shot film as well, so we would be covered. Sam did not remember my name or even what I did exactly at first, but he recognized me and was warm in his greeting and genuine in his interest. Perhaps one day we will work together again. That would be fun.
This is the finished shot. I had to do a pan in order to get the scale right on the house. The part of the image on the right side came from another location near the Manhattan Bridge. 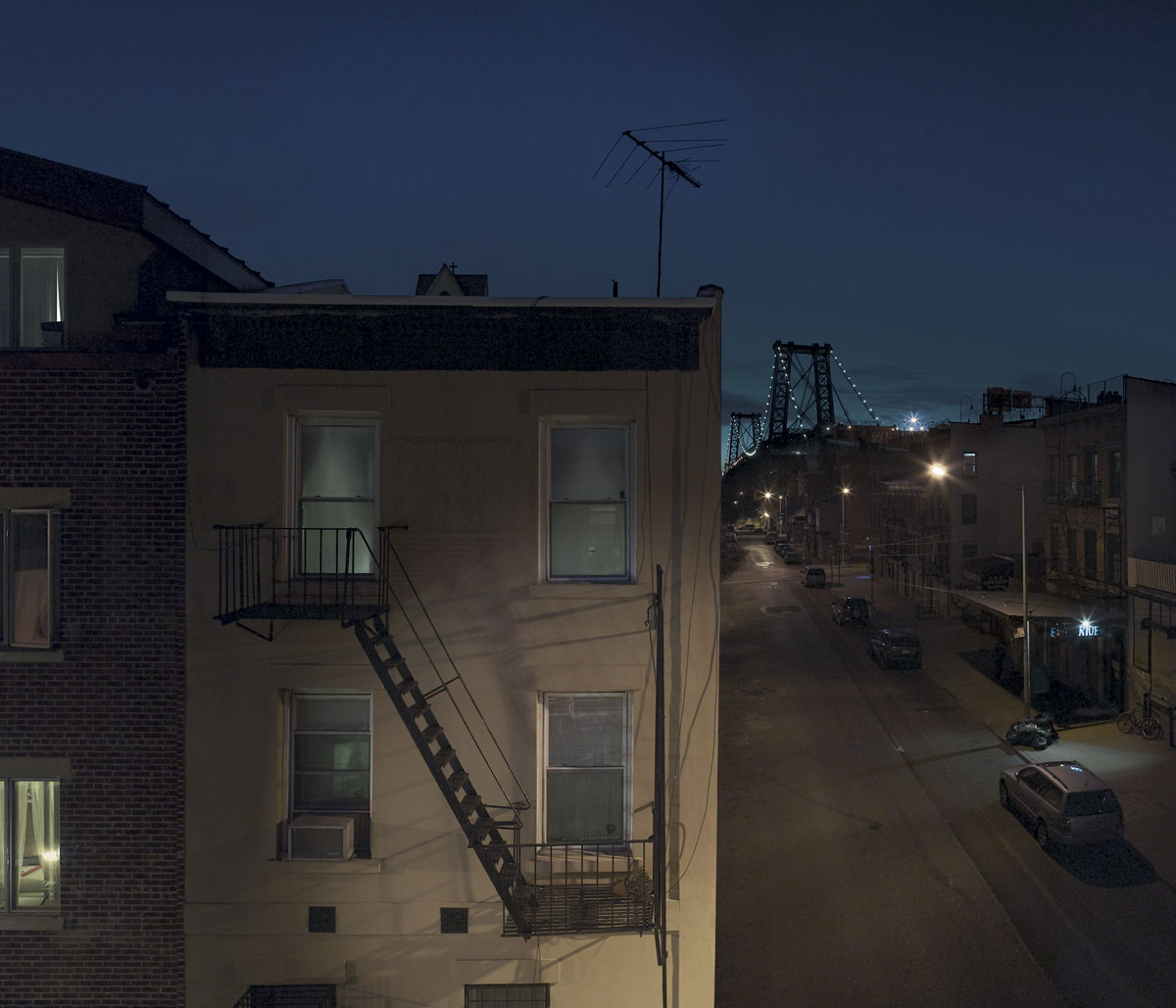 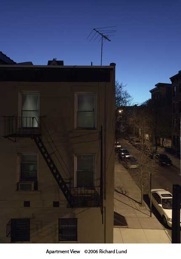 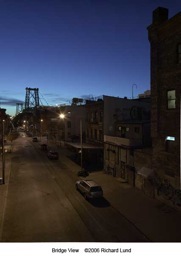 Steve Saklad asked me to shoot a backing plate for him in Southern California to use in a film he was designing to be principally shot in Germany. He said that we would be matching a location that their company would shoot on location in the course of production. But they wanted to do the work on the sound stage first and then, after traveling to LA, do the location. Not uncommon in my experience. My LA art director was my friend James Truesdale. After reviewing the set drawings, I discovered a bit of a challenge. Our view, in the translite, started on the left looking up the street, leveled off and running straight for a ways directly across the street, and then turning again to cover the right, as well as covering the view from the front door of the house, which actually was 90 degrees from the view across the street. And in one piece. There are a couple of ways to shoot a long panorama, as you may have noticed before in my posts, and one is rectilinear, the other spherically panned. One gives me as long a pan as I need and the other can cover around 120 degrees max. I had never combined them in one translite backing before, but why not? I tried it. It worked.

What I present is a work showing the two forms blended. There is a tree in the foreground that was removed later and the sky was replaced later as well. Steve wanted to deal with the sky with his own art department and also had it printed locally, so what you see is the end of my work before I passed it off to Steve’s able hands. You can see a funny thing as the curb runs right through the bare foreground tree. Not to be considered for those photoshop mistake sites, please. Just a work in progress. 🙂

Panorama style translite from upcoming feature film of the "house across the street."

Oh, yeah, I forgot, this is the house across the street that has not been built yet…
Remember, if you like it, share the link. Thanks for your kind attention.

Translite photographer and a reader and a talker.
View all posts by Richard Lund →
This entry was posted in About Translites, Motion Picture Stories and tagged All My Children, house across the street, James Truesdale, Richard Lund, Sam Raimi, soap opera pix, Steve Saklad, translight background, translite. Bookmark the permalink.