Puff the Magic Dragon Had No Parallax View 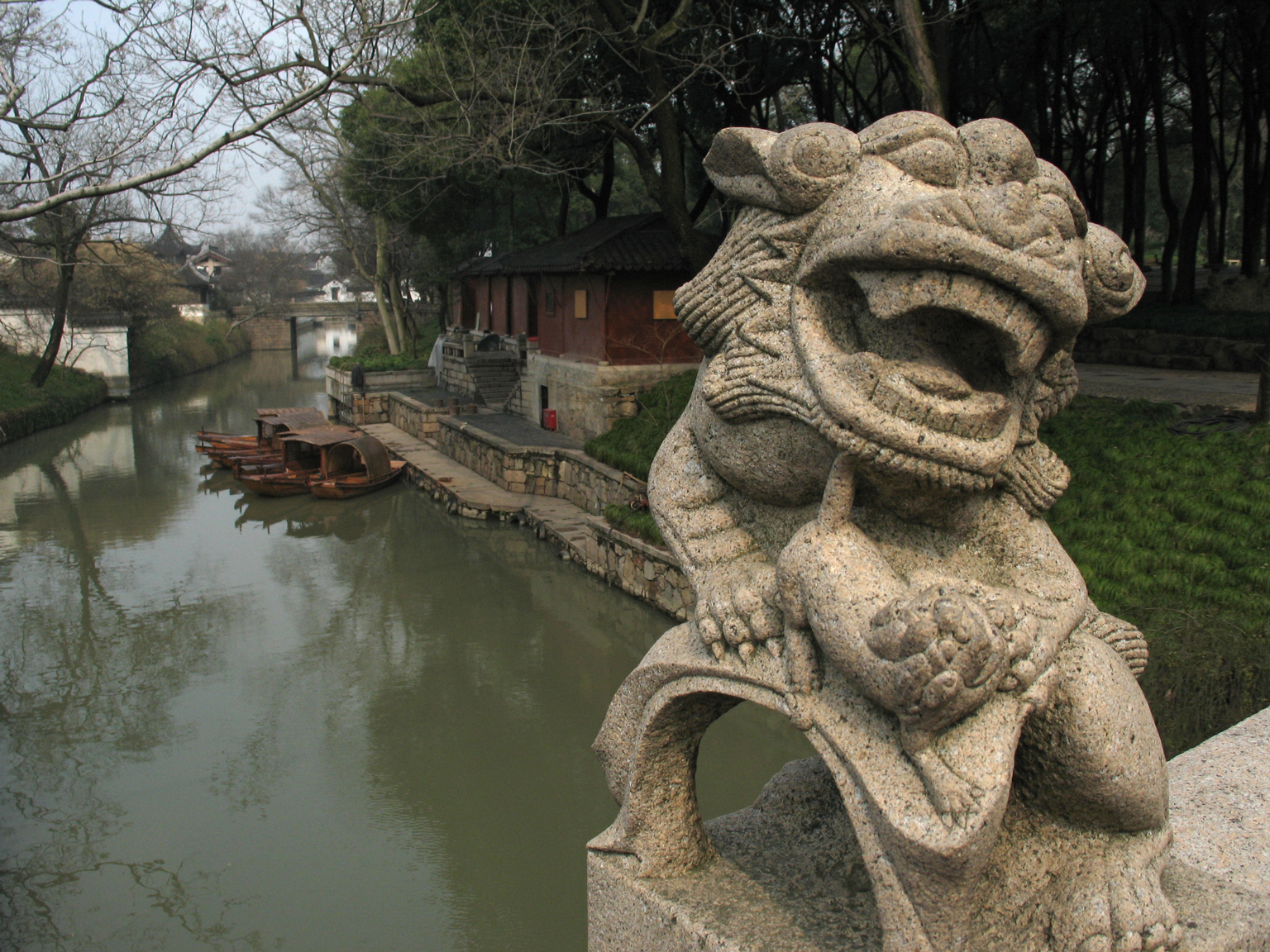 Puff has cousins and they are our friends.

Dragons are our friends. No, I never used to think that, at least when I was young. I only knew that Dragons roared and fire came out from their mouths. Very big and scary. Monster movie scary. And I think that even today a lot of those creatures in films that we see are modeled after dragons. Even Dragonquest, the little direct to DVD film where I died in the first fifteen minutes, had a dragon as the enemy. (already pirated to youtube)

But what about Puff? the magic dragon. Commemorated in song made famous by Peter, Paul, and Mary? Seems that he was a friend, seen through the eyes of the authors. Apparently some scurrilous rumors have circulated about the story line of the song being about nefarious drug use and have recently been put to death, along with the notions about where President Obama came into the world. Gotta admit that blond WigHat guy, what’s his name?, looks to me like he has egg on his face just now, but he thinks that he is serving humanity by his talking trash to the press. Really can’t see him in office, not even as a mayor. But I digress. Imagine him making foreign policy or taking a meeting with our troops in theatre, or…you get it, I know…

Remember Puff. Peter Yarrow told about his friend who had written the poem about Puff and left the paper in the typewriter. (For my younger friends, this device was a very slow printer that only took one sheet of paper by manual feed, had no spell check-at least on most models- and required manual input. It usually did not have a USB cord and many times would be ergonomically designed to be powered by the human user’s muscle movements. And there was a bell. Yes. I once sat in the home of the original inventor of the typewriter bell in Beverly Hills. Not too shabby.

So this friend of Peter Yarrow did other things besides writing poems. We owe him high praise for a kind song about leaving childhood behind. And we should stand shoulder to shoulder to defend his work against those whose heads are too full of weed to notice. They won’t mind. I guess…as long as there are munchies.

So, Lenny Lipton wrote the words. And something else. A book I have been reading. About Stereo-Scopic Cinema. And it is free to download. Check out his site and get the link for Foundations of the Stereo-Scopic Cinema. He is a really cool guy it appears. Genuine genius, lots of recognition from his peers. Many breakthrough technical feats. Really. And I am working my way through it as part of my path of re-inventing Richard Lund. (Okay, so I need to do this from time to time)

Great story on page 26.  Lipton relates the story of one of the pioneers in understanding stereo vision and what I will call depth cues. Depth cues make pictures more interesting to me. And to most, I would think. Now artists will debate this forever, but not having gone to art school, I might just take the simple approach of taking pictures that are more interesting and compelling to tell stories that more convincingly engage the emotions. Lenny introduces us to a man named Wheatstone. Wheatstone had come up with the mirror stereoscope in 1833. He and a man named Brewster had both been working on these sorts of devices. But, of course, this was before photography as we know it. I am glad they kept at it.

As Lipton relates the story, in 1849 Brewster had designed the first twin-lens stereo camera, based on the work of Talbot, Niepce, and Daguerre in photography. But nobody would make him one in England. But he had a bit more reception in France. An optician named Jules Duboscq agreed to make him one. Here came the weird part.

Lipton explained that a small number of us do not see stereo-optically. Those folks don’t use their brains to blend two slightly different pictures to see depth. Maybe around 8 percent of us have this problem. But Brewster ran into a really bad sample of people. He went to the fuzzywigs (my term) to show off his cool stuff. “Section de Physique of the Academie des Sciences” The first four guys he managed to corner and show his gear to were all stereoblind. A fifth did not get it for some unknown reason. But persistence paid off. The sixth fellow, Regnault, could see it. Yippee. (Lipton credits Linssen, 1972 and Cornwell-Clyne, 1954 and the original source of Clerc’s Photography: Theory and Practice.)

When I was much younger, I remember the term parallax. Back when we had film cameras, some had viewfinders that did not exactly show us what was seen by the “taking lens.” This resulted in some fun pictures, especially when taken by our family members. We might say things like, “Oh, I see that you cut off my head in the picture.” This was only because the viewfinder did not see the same as the other lens and it was easy to miss, particularly when close to the subject. The reverse was also true. Some pictures would show the people as small figures against enormous expanses of boring stuff. I will not go into it all, but even movie cameras had viewfinders and some work had to be done to ensure good composition. There was even a famous movie titled The Parallax View. Not sure if I remember the story, but I know that the work of Alan Pakula, director, Gordon Willis, cinematographer, and George Jenkins, production designer, is always instructive. I had the pleasure of meeting Jenkins in New York. He was gracious to me to give me some time to talk about translites. He introduced me to a progressive view of the subway in New York City. He was a subway rider because it was efficient. So I got over my ignorance, descended the stairs, and still use it frequently when I visit the City.

Parallax refers to the differences seen by each eye or each camera in a stereo pair. Since I am still a student of the subject, I will delay saying much more than that. But there are some things which do suggest depth in my two dimensional pictures, so let’s have a look. Depth cues are what we call them. 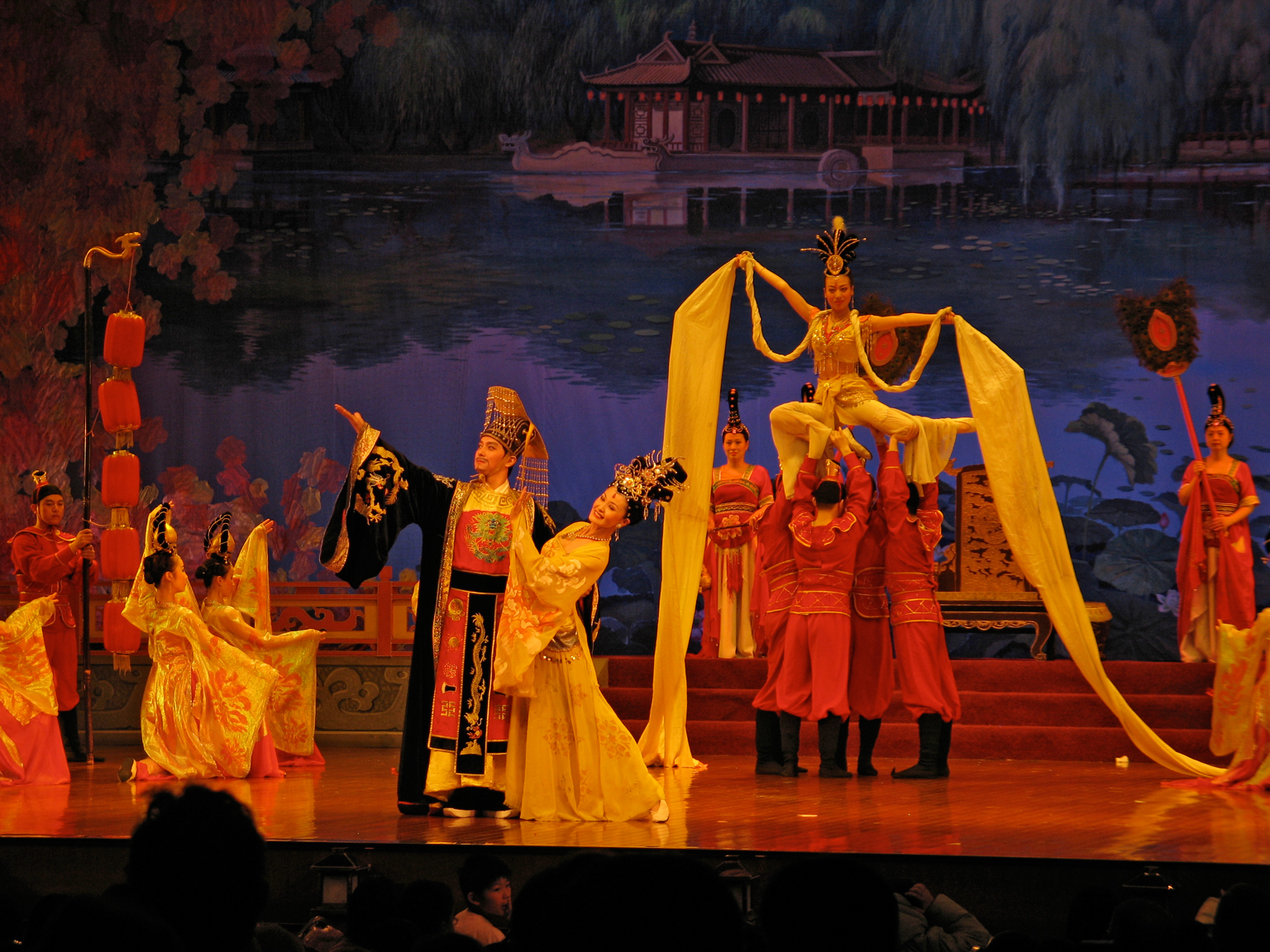 Warm foreground and cool background give feeling of depth

This is one- warm foreground and cool background. Sort of an art class way of thinking. 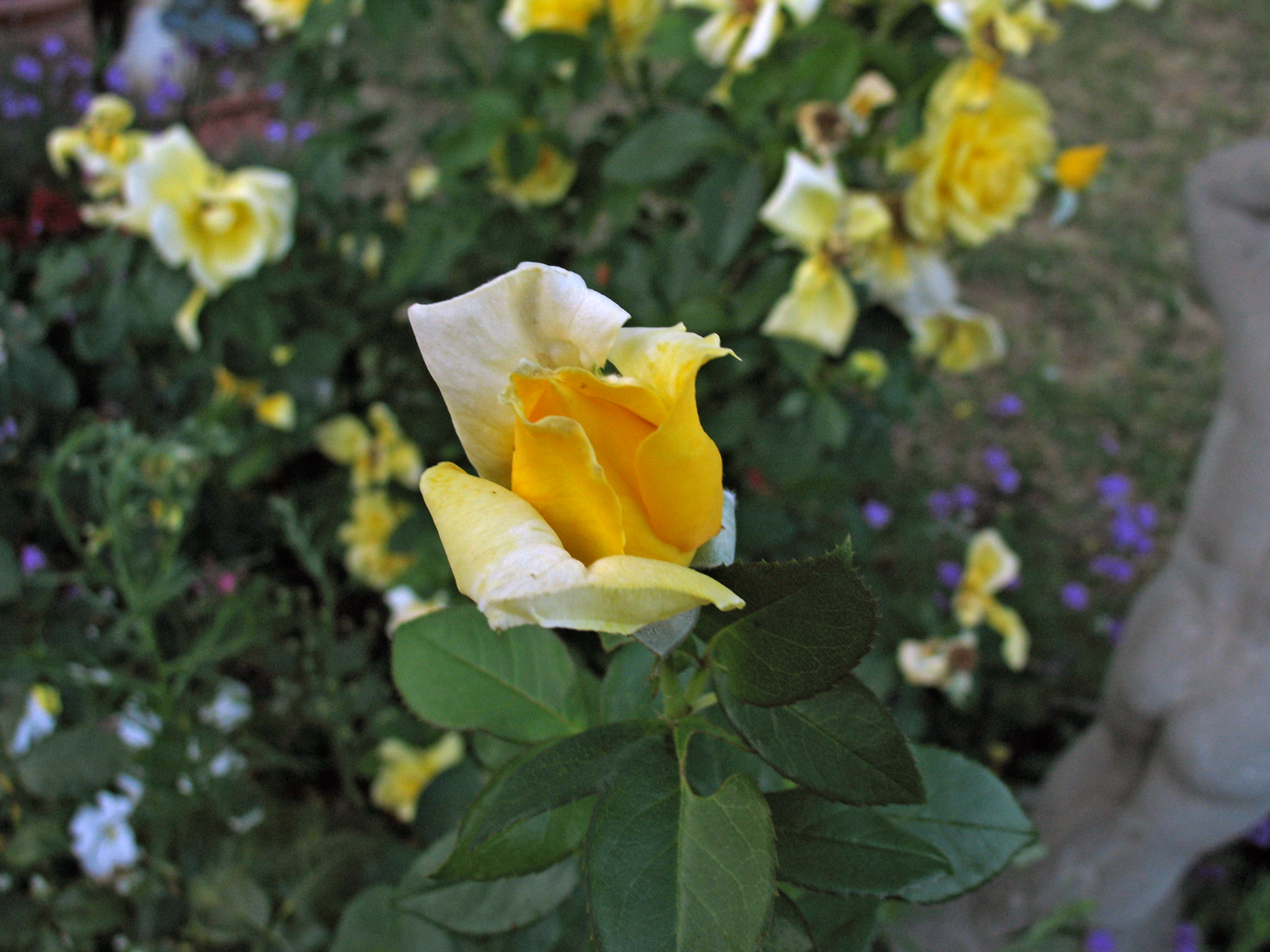 Here we depend on the relative sharpness of the near flower and feel depth because the others are blurry. This is called shallow depth of field, as many of you know. 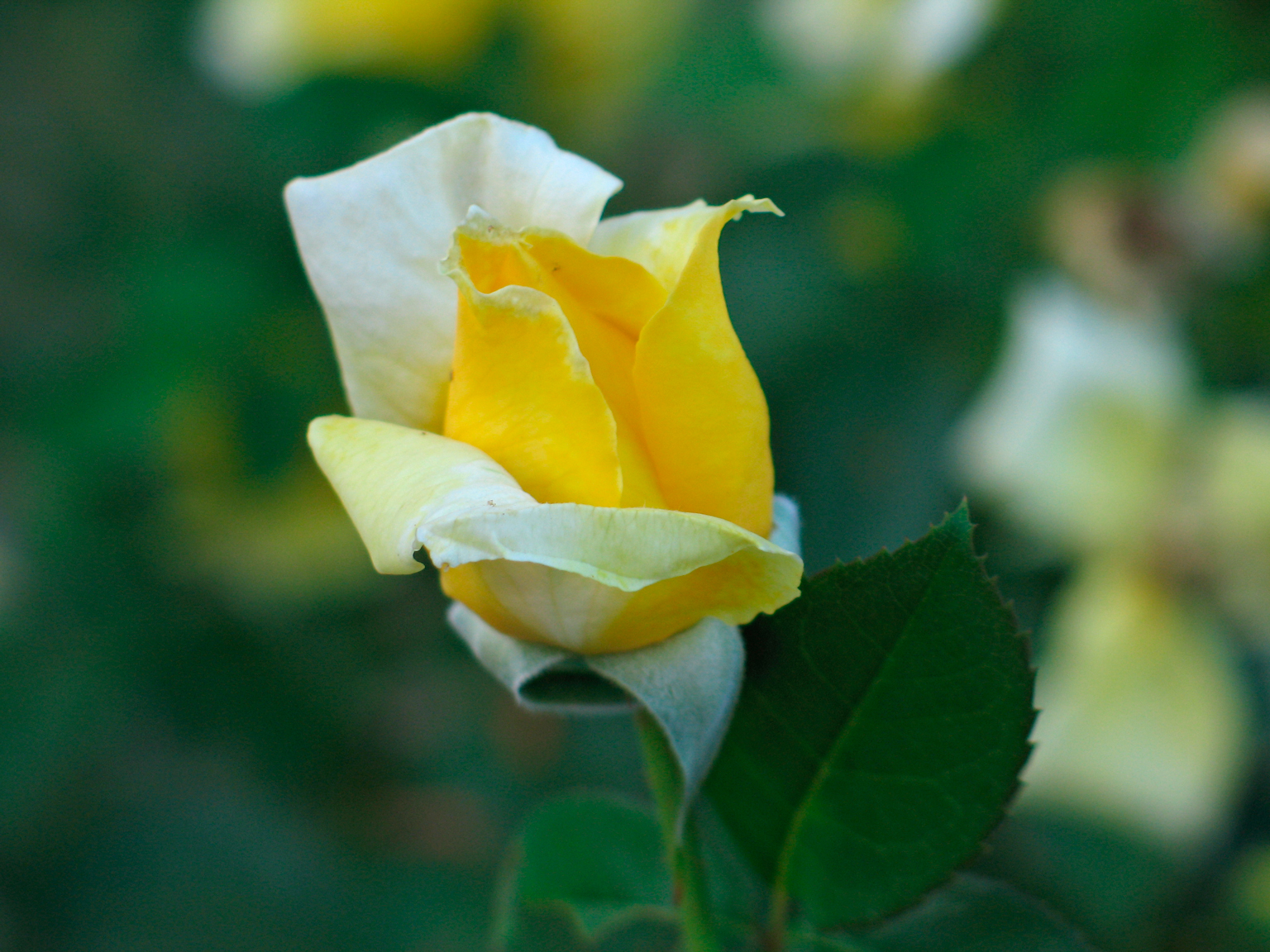 This extreme close-up view exaggerates the blur of the background. In some ways it shows less depth, but can be helpful in isolating a subject. We used this technique on Dateline many years ago when I did a background of the monitor wall and we intentionally blurred it. Although the image was only 8 feet behind the presenter, it felt more like the room extended back 25 feet. Guy Pepper and Neal Shapiro were in control of that show during that season. It grew to take up four primetime hours on NBC. Guy could be heard at the end of the show saying, “Great job, everybody, let’s do it all again on Thursday.” Or whatever night was next coming. I have lost track of Guy. He took a spot with CNN for a while after helping get MSNBC off the ground. I would enjoy working with him again. Production Design Group with Jim Fenhagen and Erik Ulfers were the design team in place. Jim has recently done the new Piers Morgan set. Erik is the principal at Clickspring Design. 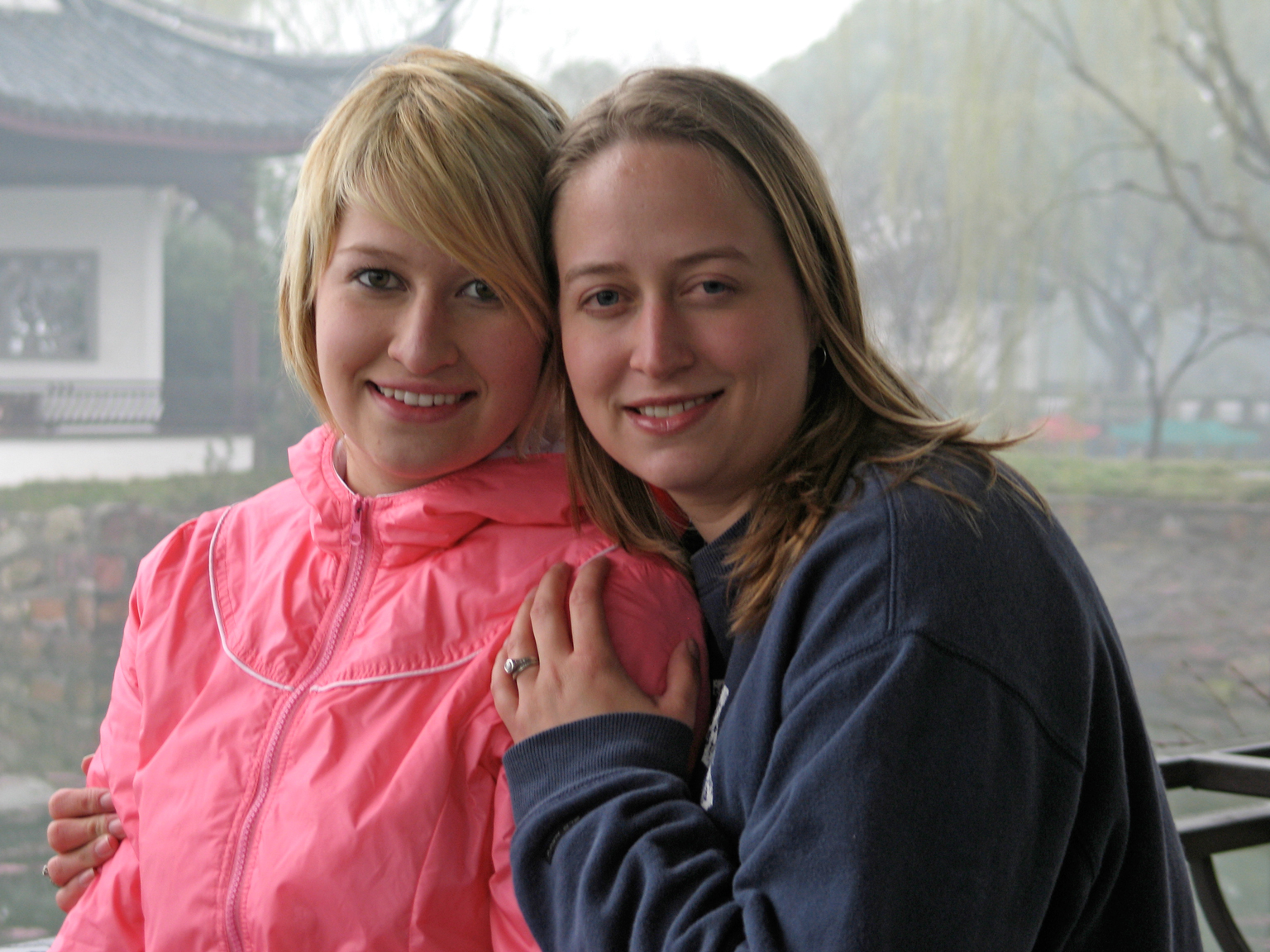 Here soft light wraps around the two young women in the foreground. It is even softer in the background, revealing depth. Having a more full range to tone in the foreground tells us that these objects are fully apprehended by our senses. We also benefit by knowing that the human face is of a certain scale, so the buildings or trees behind must be far away. I recently welcomed another grandchild who is just learning to interpret depth cues. I wonder what is going on each day as he learns to relate to his world. His cousin, a bit older, still investigates with her mouth. So I would suppose that depth cues take a while to sink in… 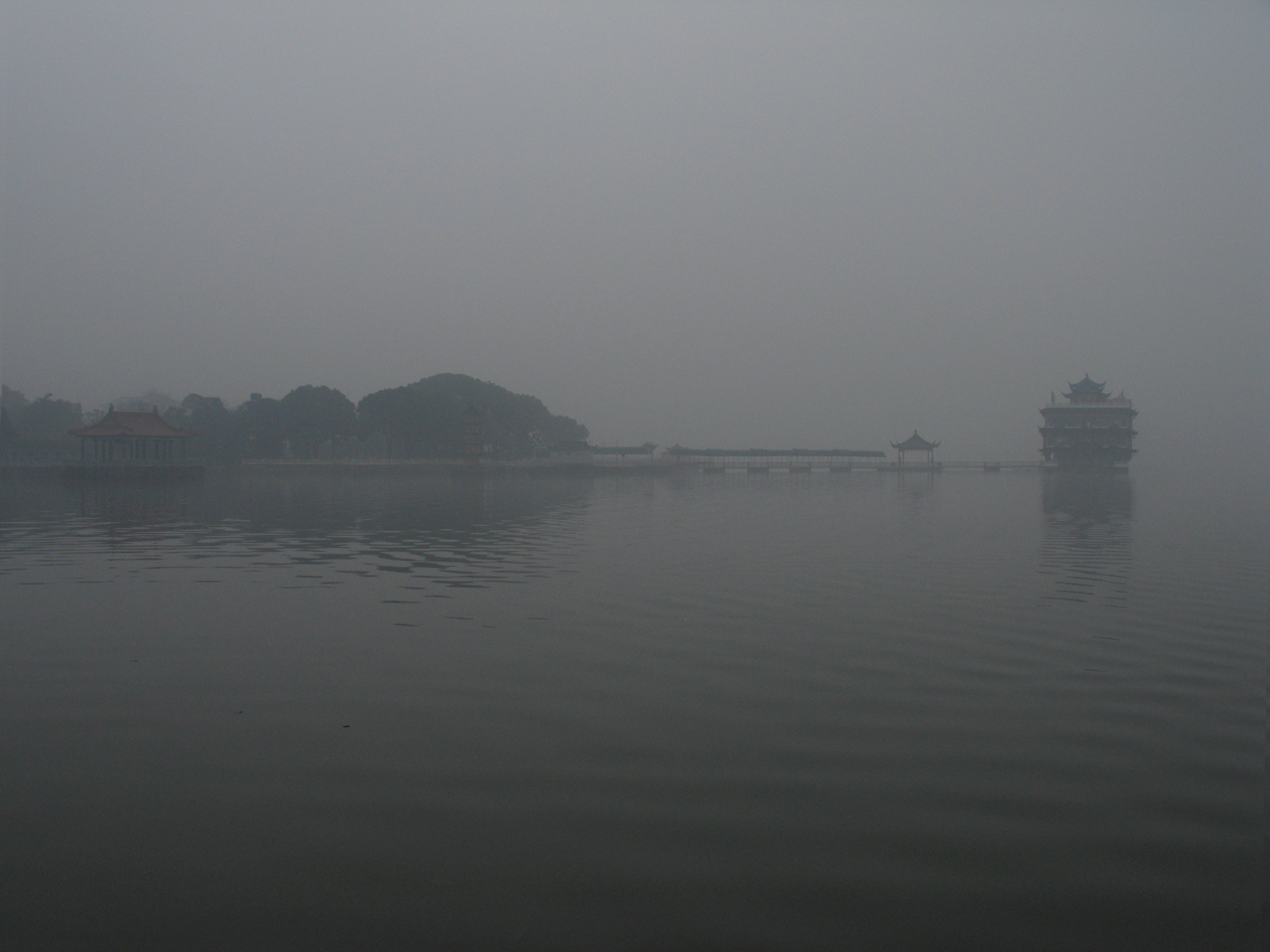 Soft light still allows for depth cue through a gradient

Greys yielding to other greys can still reveal depth. The darker foreground gives meaning to the distant scene. This would be very useful if we put some actors in front of this scene made as a translite. The greys would play to enhance the strength of the skin tone of the actors as well, making them more interesting. Richard Sylbert used this type of approach to give his actors life.

I have come to believe that our sense of color is associative. We process the scene before our eyes by comparing near elements with each other. Famous directors of photography always know how to light the actresses. I suspect that the better production designers also give their actresses and actors more by their set designs. Today’s television has seen a run toward screaming colors, but may be moving back to the palettes of yesterday by the new location based series. I took in four hours of “The Killing” the other day and was struck by the rain of Seattle and its effects. Has a bit of a slow pace, not unlike “Prime Suspect.”

But, to go back to the grey mists from the music of my youth…

“Puff, the magic dragon, lived by the sea, and frolicked in the autumn mists in a land called Honalee…”

9 Responses to Puff the Magic Dragon Had No Parallax View