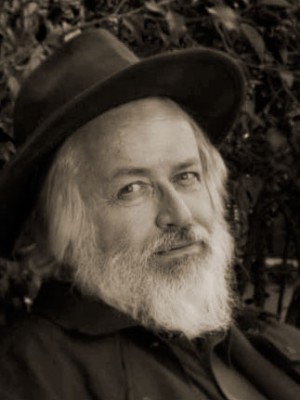 Tea drinker, Richard Lund, pictured before his hair grew out

Tom Valentine was one art director who spared no effort in planning. This is the story of Tom and the Spider-Man 2 backings.

People who design film are all over the place in skill sets. To my way of thinking, the very nature of film design benefits from being “all over the map.” The skill sets we bring to the work must be good and they often range widely. I have noticed that photographers often also are musicians. But with my friend Tom Valentine, I saw other things in his life that intrigued me.

For one, he was a serious pilot. Of a glider. No engine, just shear knowledge of the way of the winds and of the use of the airfoil. If I remember right, that is what one calls the wing or other surfaces that make heavy things fly in the air like a bird. He had a trailer and would hook it up to his SUV and off he would go with his son.

I was never invited to go, but I would have likely declined. Just too much for a guy who really thinks he understands the airfoil, but would not actually have enough faith in it to trust my life to it. Faith is an interesting concept sometimes. Of course, religious faith is a big one, but even in money, people have the full faith and credit in the currency, people make deals based on good faith, sometimes politicians and others get into serious trouble by not having the quality of being faithful…it goes on.

I did have one great experience with Tom that I will never forget outside of the film business. He invited me for a ride in his electric car. That’s right, he was one of the few drivers of the EV-1, GM’s two seater. I have to admit I was looking at them for myself, but I got scared that might not make it to Riverside and back on a charge. But it was attractive. The lease was around $4-500 a month, included insurance, and some maintenance. Tom took me for a quick spin on the 134. Silent zooming up the on ramp. Very smooth. Just the thing for a glider man.

Of course, the story is better told by the movie. “Who Killed the Electric Car?” A thoughtful film. I judged it as accurate. Just the kind of program to keep Congress off the back of GM while they kept cranking out internal combustion models. Warm that globe! (so you thought that Al Gore just disappeared? Well, maybe he got into the faithfulness problem…) They did the program so that they could say, “We offered people the electric car and they just did not want it.” Plausible deniability. Or that is what we used to say about Cambodia when we were in Vietnam. Unrelated? Remember Ike’s Military-Industrial Complex? But, hey, now GM has shifted from General Motors to Government Motors, so we should not be surprised at what comes out. The Volt sounds great. Just a bit too much dough for now.

So Tom Valentine was a great planner, too. He spent a good deal of time in New York City in pre-production in the art department. He was working on backings. He did a lot of scouting and artfully designed several shots. The ones today I will show are from Peter Parker’s apartment. When he invited me to the City to shoot, I found that we were spending all of our three week shoot pretty much in Chelsea, Gramercy Park, Murray Hill, Midtown South, and Alphabet City. The main limits were really between 14th Street on the south and 34th Street on the north. For those familiar with Manhattan, we obviously stretched a bit beyond, but I beg your indulgence.

I shot multiple 8X10’s for about three weeks straight. We would arrive at dawn, set up and shoot, and continue all through the day into the night. It was a bit chilly at times. Some mornings we would have to exercise real care with the ice on the flat roofs. Tom had me cover the whole day and into the evening so that whatever we needed, we would have the right light for compositing. The sun would cast the right shadows to match the other pictures. And so I worked. Each night I would unload the holders and reload for the next day. And somehow get the film to the lab for processing. At the end, I was satisfied that I had all the elements that I needed to make the translites look good. And so I returned to Los Angeles to work.

At that time, the film needed scanning to make the digital files. Once scanned, we worked to clean it up. Dust. My enemy. Then I could work on the actual compositing. We were still using Live Picture. For some of the pictures, I shot a bit more in Los Angeles to make a very long day sky image to tie together the long wrap-around shots for the Daily Bugle Office set. That part is another whole story. Maybe later.

I still remember going to the printer to look at tests with Tom, especially of the two pictures that I will show now. He wanted them to look great as much as I did. And his taste and vision found its expression by us working together at this final stage. I can’t recall if we saw four or five versions of the vinyl scale test, but it was way more than on any other set of backings I have ever made.

Ladies and gentlemen, I present to you Peter Parker’s Apartment from Spider-Man 2. 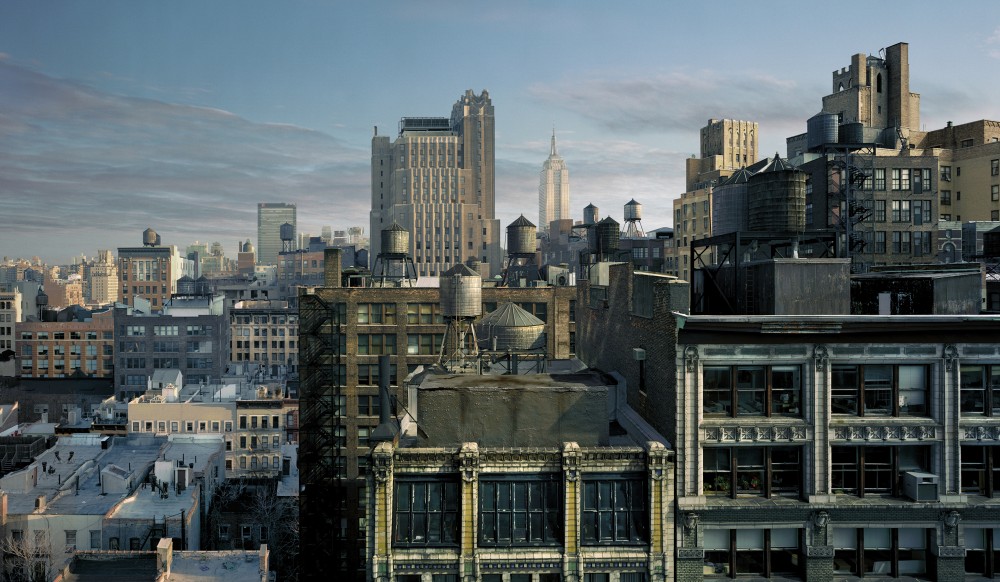 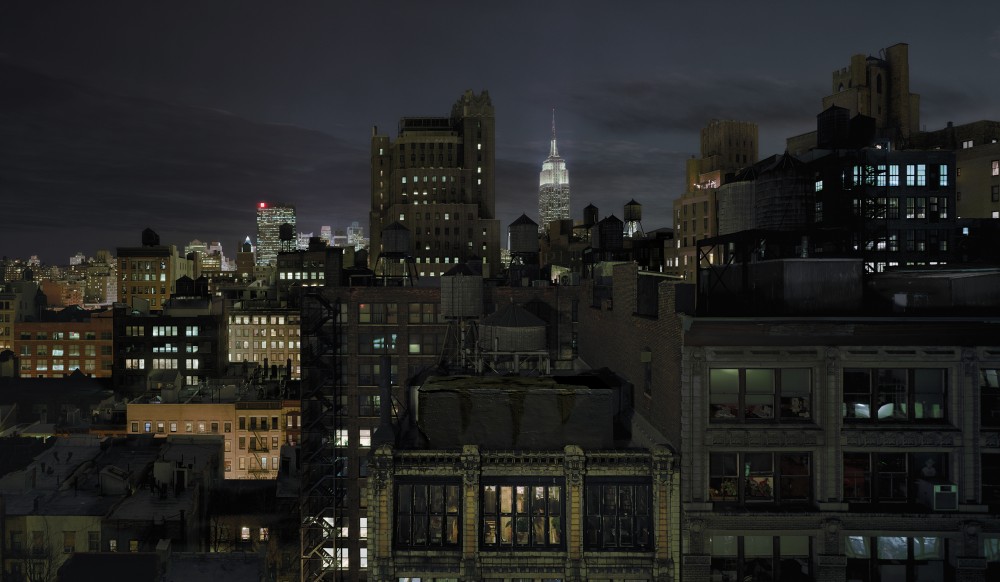 Translite photographer and a reader and a talker.
View all posts by Richard Lund →
This entry was posted in About Translites, Motion Picture Stories and tagged Chelsea, New York City, Richard Lund, Spider-Man 2, Tom Valentine, translight, translite. Bookmark the permalink.