The day we all became Israelis… 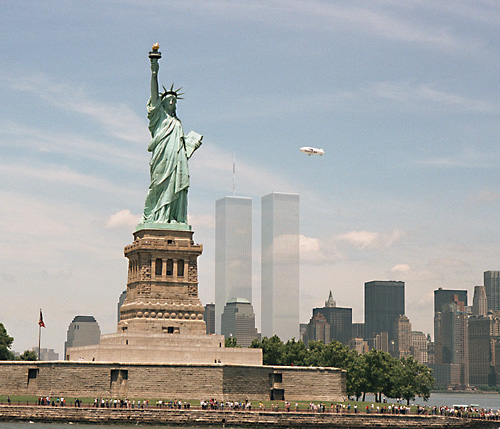 Gone, but not forgotten

In the hours and days following the attacks of September 11, 2001, I found myself numb with news. I needed to do something else. So I got to my computer and my files.
While this picture is simple, it was what I could make from what I had at the time. I had ridden the ferry back and forth from Battery Park to the Statue of Liberty some months before, taking stock pictures. In time I used Lady Liberty’s shot for a small cutout duratrans for the Tonight Show set. The theme of that backing and attending pieces was America’s Town. But in this period of time just after the attack that took so many lives, I thought that I should make a composite of a couple of the shots so that I could make a small statement from my little house in Van Nuys to join in the voices from all over. It was to remember what was gone. To remember those many lives who were lost. To remember the magnificent buildings in lower Manhattan that had served me as the tallest tripod I had ever used. And to give me a quick heads up any time I needed to navigate Manhattan because they were always visible and told me which direction was downtown. To remember the times before when we felt safe…
I felt like that day changed us all. We were no longer Americans in a way. We had become Israelis.
In the 1970’s I had visited my brother Jerome while he was a student at the Hebrew University in Jerusalem. For me, the trip was an eye opener. We had our bags searched as we entered the supermarket or cinema. We needed to pick up a hitchhiking soldier when we drove to the north so that we could have a gun in the car for protection. Some old man walked the neighborhood at night with an old carbine so that no one could make trouble. We had a long interview in a private area with a security officer before going home on the airplane.

Ten years ago, when the men flew the planes into buildings, my world turned into something else. No one harmed me in my little house, but they changed my life and the lives of my fellows and my children and my children’s children. This Sunday night past I heard the news that the man behind this big change was dead, shot by a Navy Seal. I wrestle with knowing that that evil man succeeded in part. Every time we deviate from our plans because of what might happen if a bad guy does something, we give in to the terrorists. I no longer can be carefree in my world. I must always be vigilant. Maybe that fear should just be overcome. Maybe I need to be braver. Each day I live I must choose. Give in to fear or overcome it. Fight Bin Laden’s schemes for us I must. We all must.

Now Bin Laden is dead. Let us seize this moment. Let us face our enemy. This is the time when we become Americans again. In the land of the free and the home of the brave.

Translite photographer and a reader and a talker.
View all posts by Richard Lund →
This entry was posted in Personal Anecdotes, Reflections on Living and tagged 9/11, Death of Bin Laden, Richard Lund, Statue of Liberty, UBL, World Trade Center. Bookmark the permalink.

4 Responses to The day we all became Israelis…