Hanging out on the roof can be a good thing… 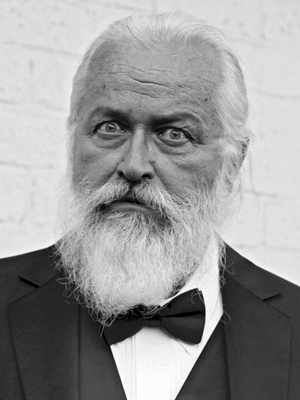 Every location that has two things is a great location. Water and bathroom top the list. I got what I needed in Atlanta last year.

This nice young lady called me up to arrange my trip to Atlanta to shoot for Fastball Productions last winter. Amy Lehman. Art department coordinator, if I recall correctly. Assignment: Atlanta skyline picture, day. We were making a translite.

When I arrived, I found myself in downtown Atlanta. At least I think that is where I was. Years ago I learned that every other big street in Atlanta is named Peachtree. They may have improved things, but I never found out for sure. The cool thing was that my location and my hotel were the same building. That has happened before, but it is rare. Scent of a Woman put me in the Waldorf. Accidental Tourist gave me digs at Place de la Concorde in the Hôtel de Crillon. And now, Atlanta. Not a big name place, but remember what I said at the top. Water, bathroom, and third but no less wonderful- sleeping room in the same building. Amazing.

On arrival day, I met with Barry Robison. Very prestigious movie right before the current one, Narnia movie in far away New Zealand. Very cool. And now- The Change-up. Now, I would think that with a name like that and a production company called Fastball Productions it would be a baseball movie. And I would think wrong. It is out now for a bit over a week and has lots of press and promotion. Maybe even a hot movie. Took a hit from the reviewers. I went to see it this morning because I wanted to see my backings. And there they were. But more on that below.

The reviewers said it was raunchy. Correct-a-mundo. Probably worse than junior high boy’s locker room humor, but I can’t say that because I haven’t been one for a long time. But it also had some belly laughs. And some genuinely touching scenes and some outstanding performances. And some great backings. I wonder if I am being a bit too self-serving. But I guess not. If Olivia Wilde takes time to visit Jay Leno and talk about her tattoo scene, I guess I can talk about my backings on an obscure blog.

So Barry and I met the first night. He gave me a pretty good idea of what he wanted it to feel like. He was going to be tied up for the shooting day, so I connected with Ian Gracie, his supervising art director. Genuinely in-the-street-with-a-walkie kind of art director. And also connected. I set up and shot some stuff the next morning from the hotel roof location, then descended to my ever so convenient room to do a quick composite and crop. Sent it to him via email. And he called me later to let me know that it was well received. And stopped by. I like that kind of connection. He respected me enough to let me do what I do and also was involved enough to make sure I satisfied his designer’s vision. Ian Gracie=good guy.

I actually had met Barry long before when he was working in New York at ABC. At least I think that I did. Long career. His and mine, I guess.

Food interruption. There is a good buffalo burger joint in Atlanta. Ted’s. I don’t know if Turner was the first owner or what, but it was a great spot for dinner. Ate there twice. Yummers. Back to our story.

Ian had said that they needed only a day shot. I hate to waste opportunities. Since I was set up, I found out that production and the location did not mind if I stuck around on the roof. So I did. We had some big clouds come through in the afternoon. Then, at sunset, the light was coming from the wrong side of the city to make a good sunset. But I did stick it out and shot the night as well. The haze was thick. Some of the lights had big ghosts. But I figured that we could fix it later, especially since it might be years and years before someone else would want it. Stock images are good to have. Especially if they match the day.

Well, we made the backing. The day one. They got it and put it up and shot it. And guess what? They called and said, hey, can we make a night one and how about a stormy day one? “Yes,” I replied. We can do that. Shooting more coverage helped me more than a little bit. If I have clouds and flat lit buildings, I can isolate the sky and make a really decent stormy shot. In the film, they opened up that scene some to make it less dramatic. Easy to do with a backlit backing. My favorite kind. And they really shot all of them. Big pieces of the scene, nicely blurred, but they “read” well. Some reasons: the art department gave them enough room from the set wall in the design of the set. The director of photography, Eric Edwards , really knows his stuff. I had not met him before this film, but I can tell he is all “hollywood” in his lighting and camera work. Today’s Bill Fraker. (Eric did not have a Panabar, however. This was Bill’s personal case from Panavision perfectly divided for ice on one side and bottles on the other. Really useful on a long night, I hear.) Might be others out there as good, but Eric really delivered the goods on this one. And I was involved at every step on my part, from shooting to retouching to printing, making the tests myself. And now I have three great examples of my work in a current film. And I feel good about it.

Joe Carracciolo, Jr. was the exec producer. Worked with him and his dad on past projects. Did not get a chance to say hi. Missed that. Another one of those in-the-street-with-a-walkie types.

In order, I present my three images. Day, stormy, night. 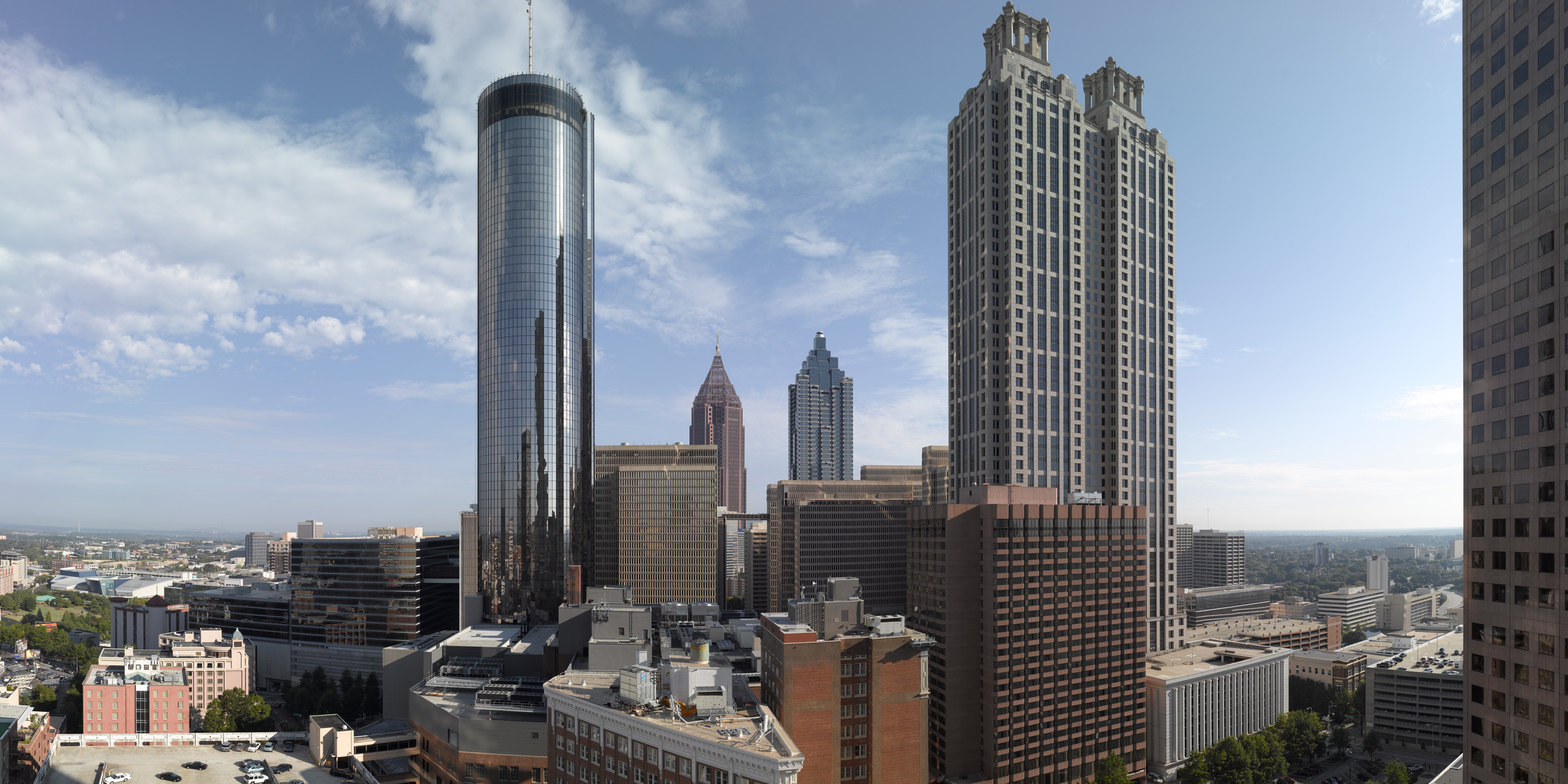 The first translite I made for The Change-up, Atlanta skyline. We moved one building closer. 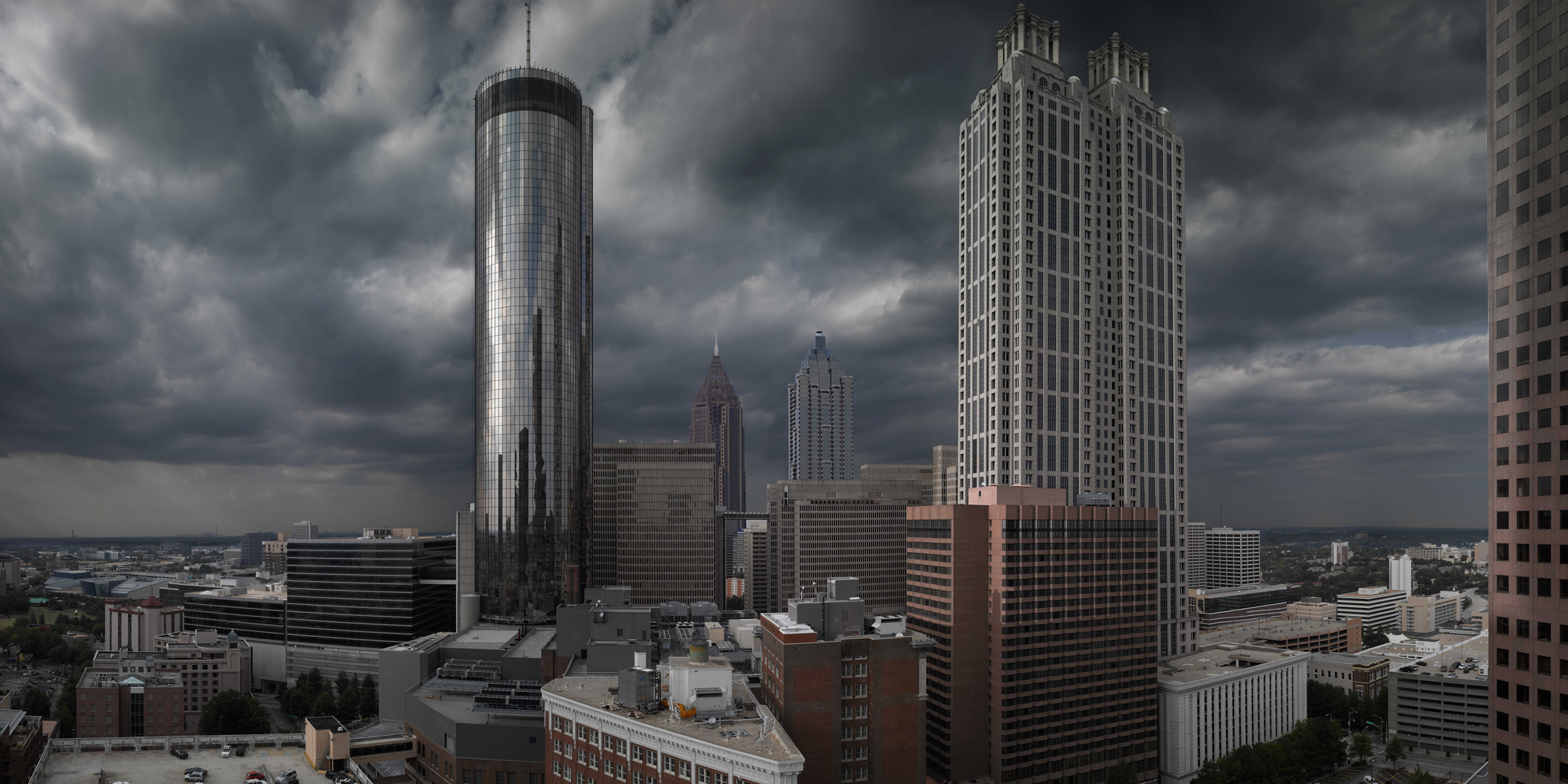 Paths and curves make a cloudy day into a stormy day. 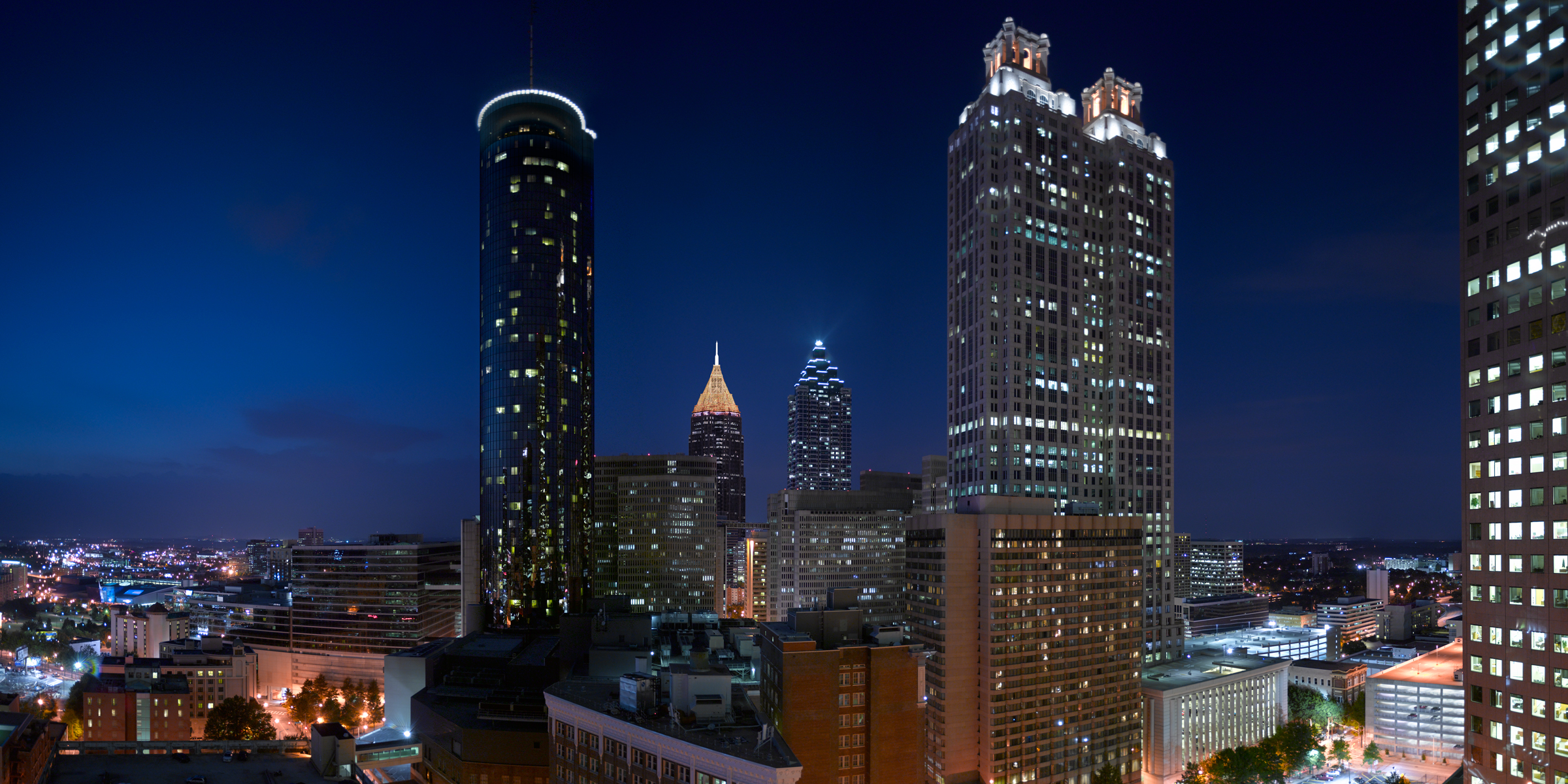