My signature or the part you saw all the time… 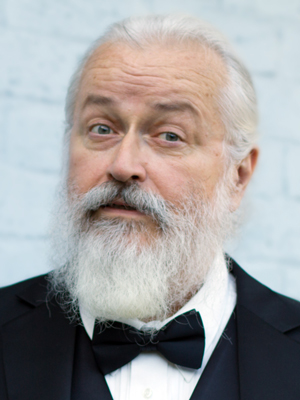 Richard Lund just about to have a thought…

Sometimes I really got exposure. Tim Russert made sure it went on for a long time just by doing a great job in his work.

Meet The Press. Iconic show. And Tim Russert. Iconic journalist on NBC. “If it’s Sunday, it’s Meet The Press.” One could go on. But the show really was a staple for people on Sunday mornings and for a good reason. Tim Russert did his preparation and was determined to get the truth from his guests. When I was involved in the set through the invitation of Jim Fenhagen, we had the fun of making it work for High Definition Television. Last time I showed the map of the world. This time, the background that wrapped around the set. The center of the set was an angular table with Russert at the head. Most of his guests sat to his right and from what is called camera left in television. We made little Meet The Press logos on duratrans that fit into frames. They were made to simulate a little open hanging wall of monitors- tv’s in layman terms. Having a transparency was easier then putting in the actual screens and made the operation of the set easy. Along the camera right side was the map. And surrounding the whole shooting match was a long set of transparencies printed on vinyl. Jim had the idea of making a set of monuments in park as the concept. So that is what we did. The long wrap ended up 129 feet long. I will show the middle of it, the part behind Russert’s chair.

But first, I will talk a little about the shoot. I spent around a week on it. Late summer, if I remember. One thing about taking pictures in DC is the overlapping jurisdictions. Peggy Pridemore was my guide on these things. She is one of two very memorable location people in DC. (The other being Michael Wallace- not the news guy but the guy from Richmond.) Peggy knew people. The important folks. Not senators and congresspeople, but the folks who controlled the media’s access to places. She put me in touch with the National Park Service lady. I had to get her on board first. Then, the Capitol Police were key on this one. They were about 1500 strong when I did this shoot. They have the job of protecting Congress. And by connection, the Capitol Building- the area being called Capitol Hill. Lots of office buildings, a little underground rail line, and also they go when Congressional members travel. Most people know the Secret Service who protect POTUS or the “President of the United States.” But not everyone knows the name of the Capitol Police.

I got the required permit from them. It gave me permission to do something not easy to do- put down a tripod with a camera on it. Hand hold any camera you want in that area and you are fine. But tripods are no-no’s. It all started with Billy Jack Goes to Washington. The movie. Okay, so you never heard of it maybe. But it was an indie feature that came to shoot in DC at the Capitol. And they brought all the ruckus of a film crew and extras and made a scene of a public demonstration or some such and really MADE A SCENE. So, after that, no more movies around the Capitol. At least no tripods. Now, of course, a few folks got to do a few things. I have shot from the Speaker’s office and from Ways and Means offices and some other places. But it seems that someone has to know someone for that to happen. Another story.

Back to Meet The Press. Since it was for a news show, that presented a whole other picture. First amendment freedom of the press rights. I could put the camera down and shoot my 8X10. I had to still carry it in from the car parked a ways off, but I could roll my cart in with it and shoot. I remember shooting the Supreme Court Building that way and especially the US Capitol. I set up late afternoon one day on the Capitol lawn. In a few minutes a nice Capitol police officer came strolling up and wanted to know what I was doing there with my stuff. I loved whipping out my permit and just staying put. It did not hurt that the shoot was for Meet The Press, either. That show had a solid reputation. Thank you, Tim Russert.

So here is the middle. Note the balustrades. (Click on the picture for a bigger version. Still tiny.) I had to cut around every one for the sky to show through. When I have a translite background on a show seen with high frequency, I call it my signature.

Thanks for stopping by. If you liked it, share it. 🙂