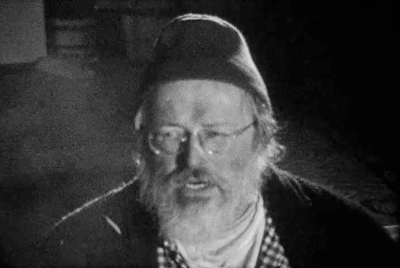 Brother, can you spare a dime? Not quite there yet…

I still love baseball. The game, not the experience of being a fan necessarily. And the big league ball parks are a world to themselves. Got to visit one recently. Athletics’ home field. Shot a backing for Moneyball, the new Brad Pitt film. Could be a good one. It certainly had a good design team. That’s where my friend Brad Ricker comes in.

Brad had some good work for me on Charlie Wilson’s War. I got to be back in DC shooting backings from the Capitol and some of the congressional offices. Brad had been the supervising art director. But that is another story…  He has the abilities to pull together a lot of things to make a good story that you can really see. (BTW, he was part of the team that did Inception, one of my favorite films of recent days.) His skill shows in the office set of the baseball team general manager played by Brad Pitt in Moneyball. Much of the under the stadium stuff in that film was designed and built under his supervision on the lot at Sony Pictures. Just visiting the set, even before it was lit, told me it was “real.” Of course, great set decoration is also essential. Look for the contributions of Nancy Haigh. And Jess Gonchor was the Production Designer, heading the efforts of all. These folks are the best of the best working in that world of making us believe what we see.

Back to the under the stadium set. Brad believed that he needed to invent a bit. He saw that the real offices did not have a window out to the stadium, but that in order to inform us of their connection to the story, he found a way to open it up to the place itself, the stadium, the field of battle. It is what my friend John DeCuir calls the “biosphere of the set.” John says, “that set design depends on proper connection with the world of its creators to connect the story with that imagined world.” Brad put a staircase opening just outside the office window so that we could make that connection.

You can see a bit of the set in the trailer for the film. The clip I watched had a short scene at about 18 seconds in where you got the depth cues of his design. There you will end up with a glimpse of my backing. I present the crop vinyl backing below. 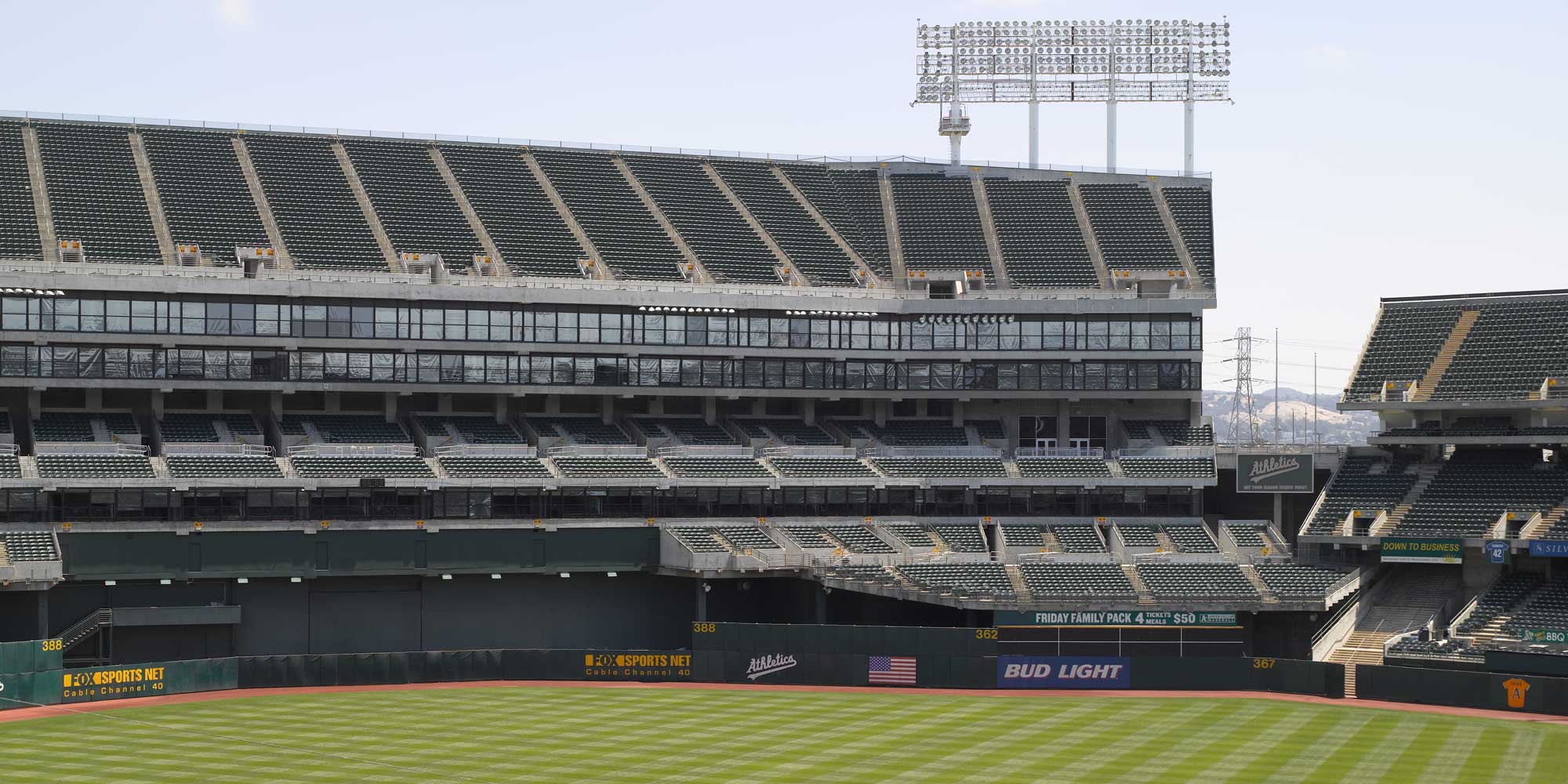 My vinyl backing made at 40'X20' completed the biosphere connection with Brad Ricker's set.

The next shot is a night scene. We did not end up using it, but you can see some of the crew’s positions for the shooting they were doing that night. Wally Pfister is the director of photography. I had the privilege of watching him operate the Panaflex film camera with really long zoom lenses the night I was there. He is committed to shooting film as the capture medium. He also shot Inception, so he is one man I will follow in the future. Yeah, I guess I am a fan. 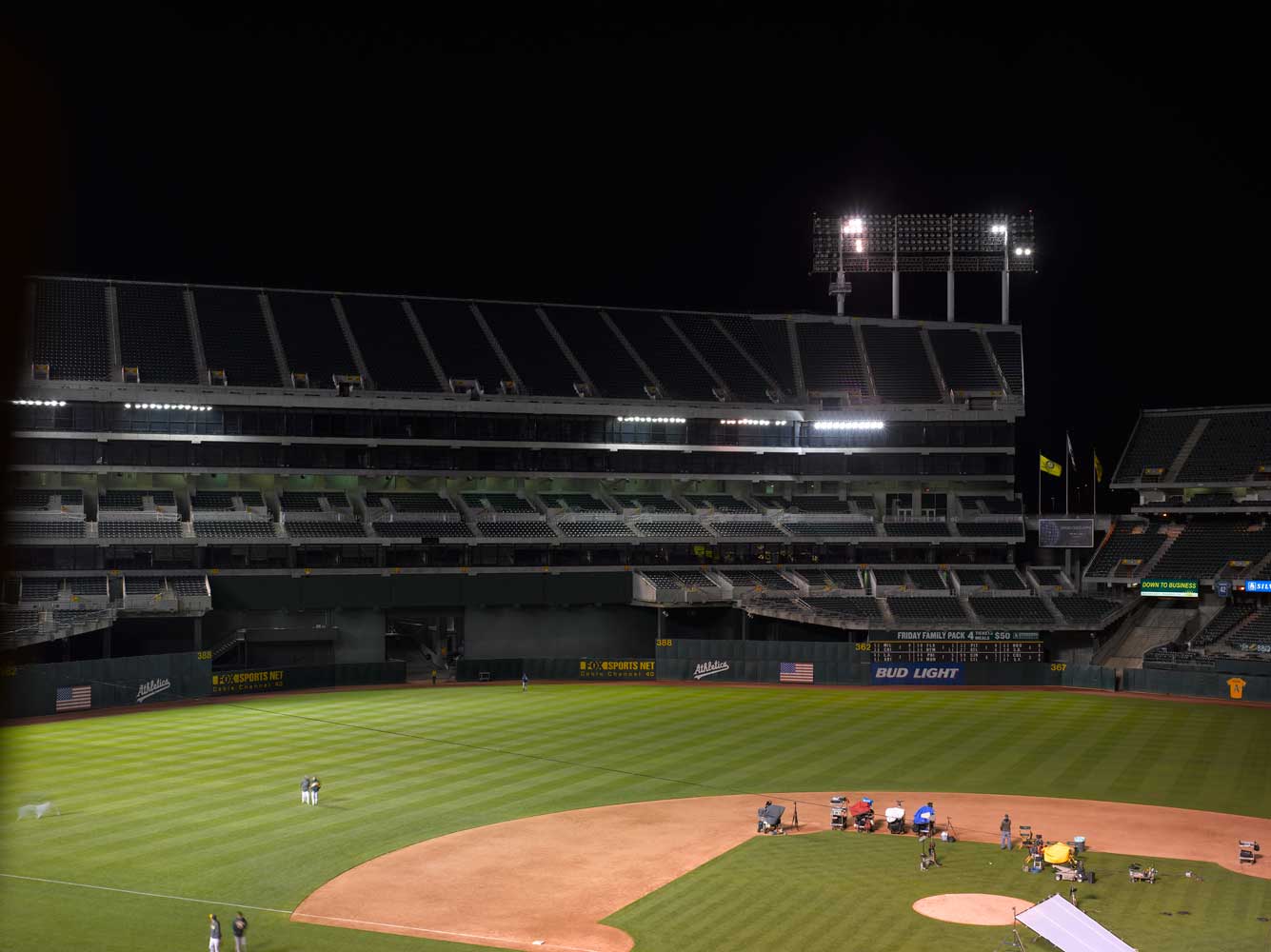 The scene during a break in the filming of Moneyball

One of Brad Pitt’s films for which I actually got a screen credit was Fight Club. It still has a lot of buzz today. It is part of our shared consciousness in western culture. Still ranks up in the top couple of hundred films on IMDB. I did not know Brad Pitt then. I did see him on the Sony lot during Moneyball, but like all of the stars, he and I don’t hang out. I am happy for his success, of course, as it means more jobs for all of us in Hollywood. And his films are fun to watch.

Fight Club did bring me into contact with one memorable guy, a real character named Richard “Doc” Baily. Doc was the man responsible for the scenes where the buildings blew up and collapsed. My part was to make the building “plates” in Century City. He complimented me when I gave him the scans of the night buildings because they were nearly perfectly straight. We miss him and his work. His company was called Image Savant. One of the folks I count as treasures in my working life. As you can see in this post, there have been many like that. I am truly blessed.