Lighting Products after I take the pictures… 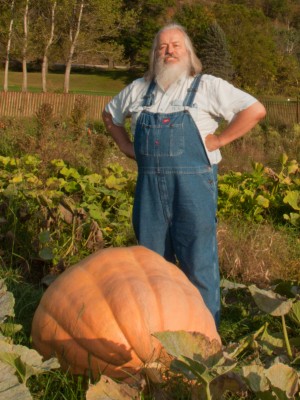 I am only pretending to raise pumpkins. Acting, it's what I do.

“If God wanted you to take pictures hand-held, he would have given you three legs.”

I am not going to sell you a tripod today. I just think that you might already own one, but never use it. Tripod photography is a pain in the tuckus. So uninspiring… so fixed-wing…so Microsoft Office… so irritating-when-you-need-to-move-an-inch-t0-the-left exasperating. And so heavy. And yet…they play a role in my photo life. Not just for translites. But also for cookies. Not the kind that websites track you with, the kind you eat, or at least I want to make you want to eat. Here is the story.

Take a basket of Good Habit cookies. Gluten Free, tasty, real food. I can use words, but why should I when I take pictures for a living, right? And they come packaged. In foil and plastic film. Did I say, “Reflections?” Well, yeah. What I really don’t dig are burned out highlights. Just blocks of white. Good for snow and sugar and silver halide paper before you print on it. Not as attractive in a photo. Okay, so little tiny, itsy-bitsy blocks of white might work, but not big dog-tag sized pieces.

They needed a quick shot of the cookies in a basket for publication. (Remember that? Printing ink on paper! How quaint.) And maybe online too. I had a roll of white paper, but my gradient roll was a goner and I did not have time to run to Hollywood to restock. And I did not want to build the world’s largest farm on teeny-weeny hot lights with tiny black wrap cutters. It was really about the blaze.

Lost? Here is the history lesson. Long time ago I made a big blow-up a bottle of some laundry stuff for a commercial. The shot was my first product shot, probably. I really did not know the field, but my buddy Ray did. And he helped set it up. The director of the commercial who was also the one doing the cinematography came by to see it. He liked our work, but wanted to add a blaze to the product label. That would be a soft-edged streak of light across the name of the product. Just a bit added, a highlighting of it. We call it a “blaze.” He set up a small fresnel light and put two sheets of cardboard in front with a narrow slit between, allowing the blaze to come through.

Later on, as I worked on news sets for Television, I had a use of this type of thing a lot. Little hits of light, softly kissing a surface to make them less boring. A bit of dance, eye-candy.

Back to cookies. I set up the camera, a Canon 7D, with my top-light Diva Light casting the shadow below. And I shot a whole series of shots, starting at over exposure, going down to underexposure. Maybe a range of five stops or so in narrow changes. (Pretty bright to pretty dark for those not talking camera talk.) Because of my heavy tripod, each shot would match the one before and after because the camera was in exactly the same place.

So, now, I took the pictures into my computer and used Adobe Photoshop to stack them into a series of layers. The light pictures were on top, going down to the darkest at the bottom. Photoshop was not the first program that I used to do this. I started using layers with Live Picture. It was a powerful program that did this trick of allowing me to paint out the part of the layer that I did not want to see, revealing the image below. It worked by making a mask that could be painted in and out, allowing fine adjustments without changing the picture. Sort of playing peek-a-boo with a mouse. I paid $3500 for it at the time and thought I got the bargain. It took Photoshop about seven or eight versions to catch up until now I just use Photoshop version 12- aka CS5.

Here is a set of five frames, from bottom to top, and finally at the bottom of the page will be the final shot, with retouching to fill in the missing background paper. The higher number layers will seem white, but that is just the way that Photoshop copies them for the web. Where you see blank white, the actual layers are clear. 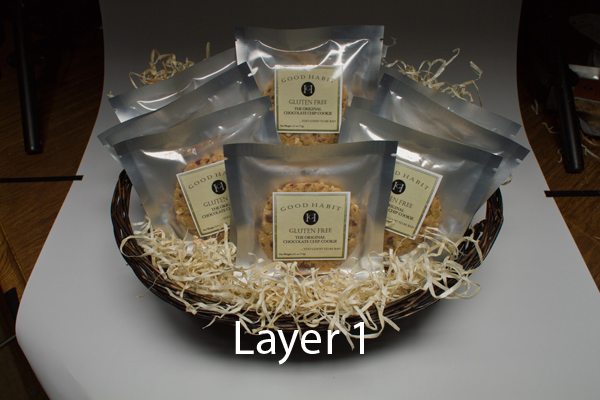 Bottom layer of stack. Pretty dark, but the highlights are under control. 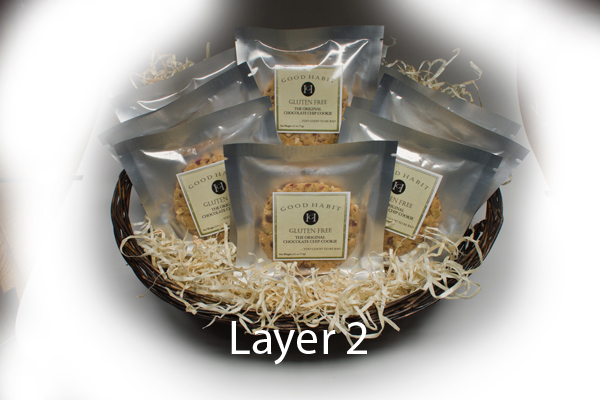 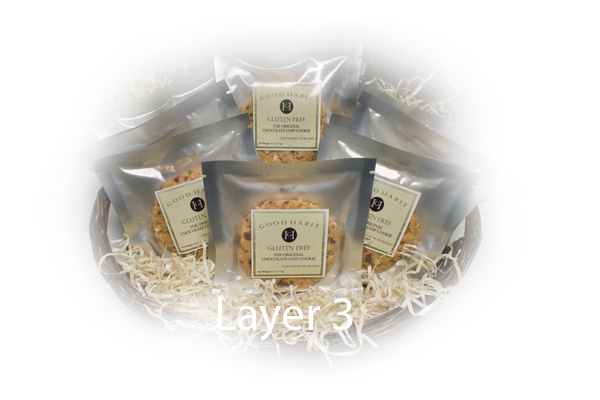 Mostly about the packages, allowing the background and the basket to fade 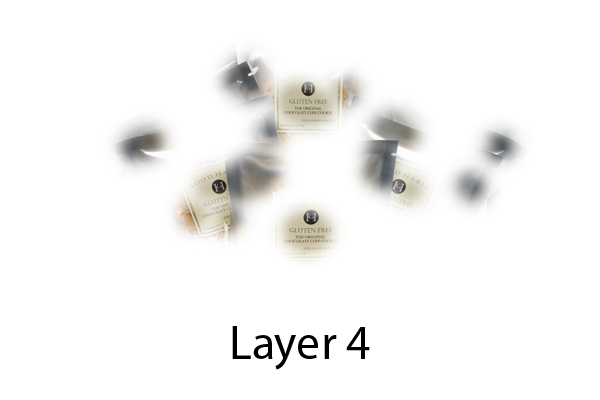 Here are the highlighted labels 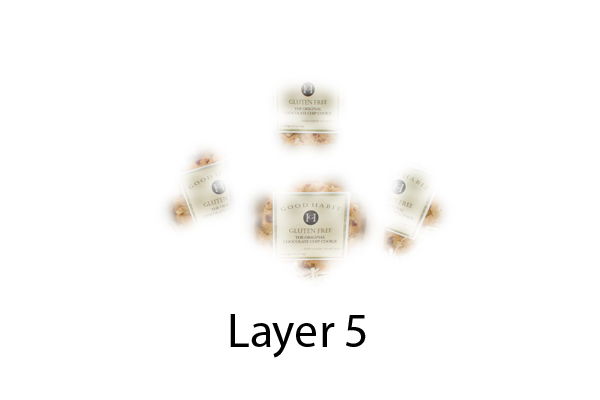 Here are just some tiny soft hits, mainly on the labels. 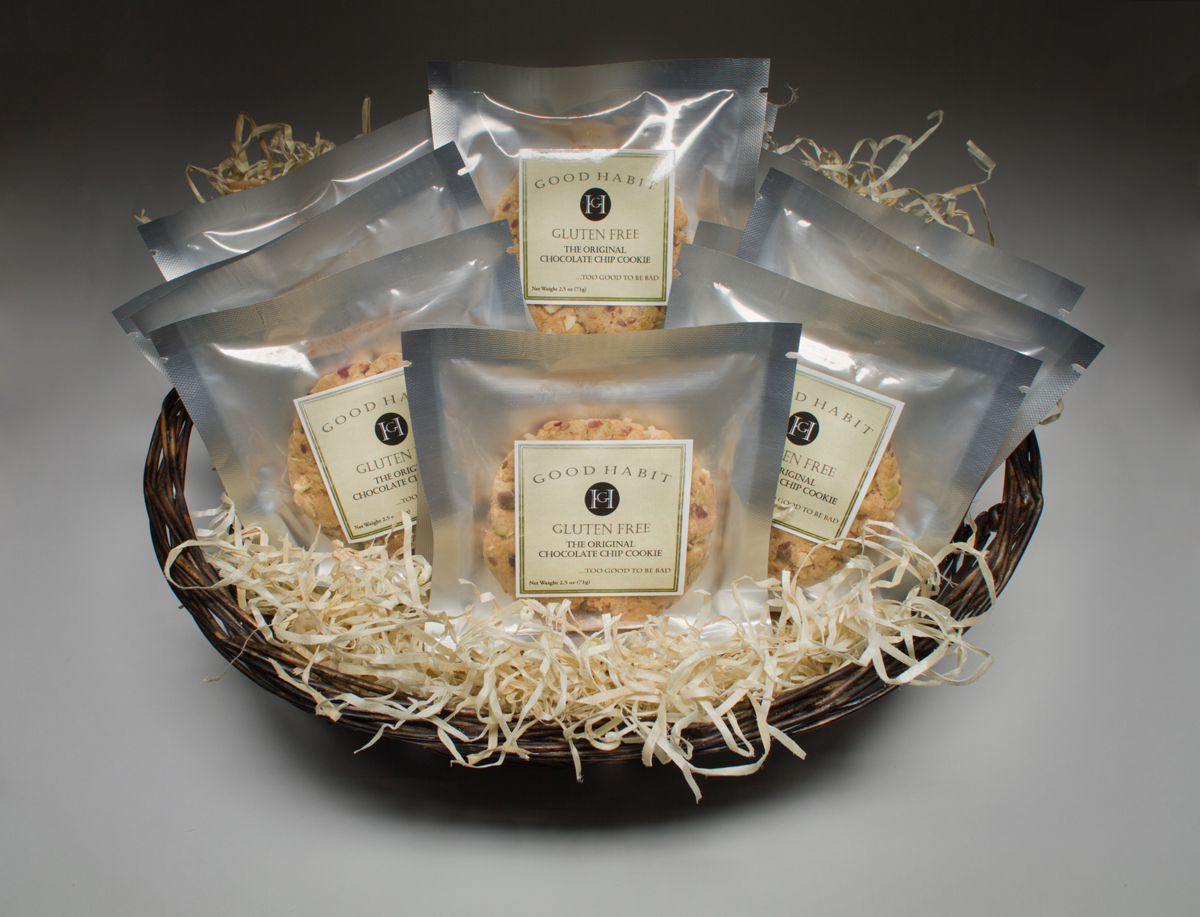