The maps, they are a changin’ 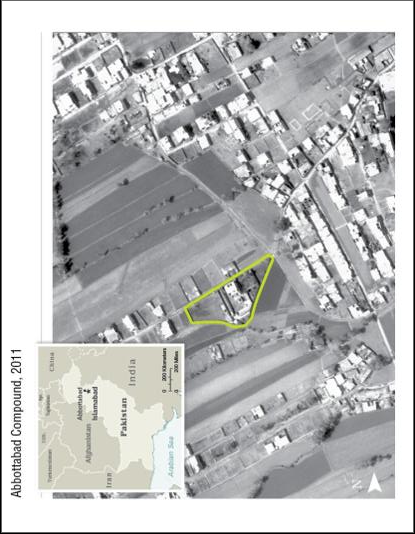 Taking a break from my own pictures, I have a confession to make. I am a news junkie. I am not sure if there is a 12 step group for that, but I have a hard time staying away from the news feeds. I did listen to the TV a week ago to hear the president, stayed with NBC for about an hour, and then I was back to the online sources. I don’t mind TV, but it is so BC. (Before Cable)
I know just a little about Pakistan. I have spent some time learning about the wild west areas in the north-i.e. Waziristan, and about Quetta, on the way to Afghanistan. And I guess I knew the name Islamabad. Some friends of mine used to spend time in Pakistan providing medical care. And I had a growing suspicion that the Pakistani leaders had very mixed feelings about what we wanted and what they wanted. I know that the Army runs things. And that they worry about India a lot more than they worry about the USA.  And that the country has a lot of people who could do better in life if given some freedom and help. Not necessarily from the West.
But now, there was a new town to learn about. Abbottabad. Took me a while to even figure out how it was spelled, but I found it. Google is nice for stuff like that. But herein lies the rub.
I use Google maps a lot. And I went to my browser and found Abbottabad. I thought I wonder what we, the mere users of Google, might find. Like maybe that there would some clue as to what we could find looking at the aerial photos tied to the maps. I mean, the Feds had offered 25 million dollars reward for this particular most wanted person. For a long time, I had a fleeting fantasy- call it a story idea, sounds better- that if someone could get some funding, that person might go wandering Pakistan to see if UBL would show up somewhere. Very American approach. Maybe investing a couple of million in research, hardware, and body guards would bring a reward of ten fold. Not a typical startup, but who knew?
I listened to the description coming through the media to where the event happened. Something about Bilal Town, something about being close to a Military Academy. I looked over the map and started to scoot around with my mouse. Never really felt sure, but I did finally pick out one compound that looked like a candidate. Here it is. 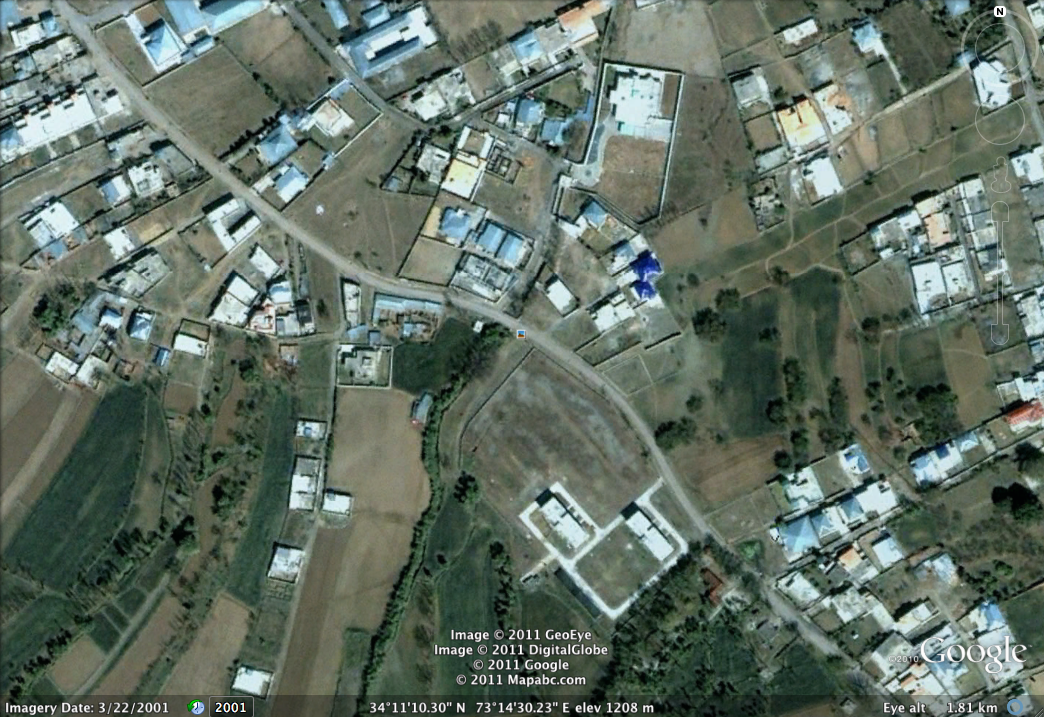 First night, and oh, note the date of the data, lower left corner

So, I thought that the building near the top looked promising. I double checked through Google Earth. I thought maybe I could change the angle and see the building structure a bit more. Three story building was the description. And then I saw it. The date of the data. Really handy feature. “Imagery date 3/22/2001” A Big Oops. That aerial mapping pre-dated the attack on America. Time to go to bed. I did.
Next morning, I was interested in the story (of course). And the Department of Defense (DOD) had released a fairly low resolution picture as part of their powerpoint presentation of the raid. I got it on a news feed, but it was really just DOD pictures. But I saw something funny about the Reuter’s version of the picture. It was larger. And it had a different angle. But the same monochrome style and the same type of outline on it. But in the corner, a Reuter’s Copyright notice. Hah! So I went back to Google Earth to check the image. Found it. So was the house there in 2001? No. Google had updated the image overnight to one with a Imagery Date of 6/14/2005. Somebody was burning the midnight oil. But there was something odd. I opened both images in photoshop and rotated them to make North at the top and to match, but the arrow on the Reuter’s was off by 90 degrees. Have a look. 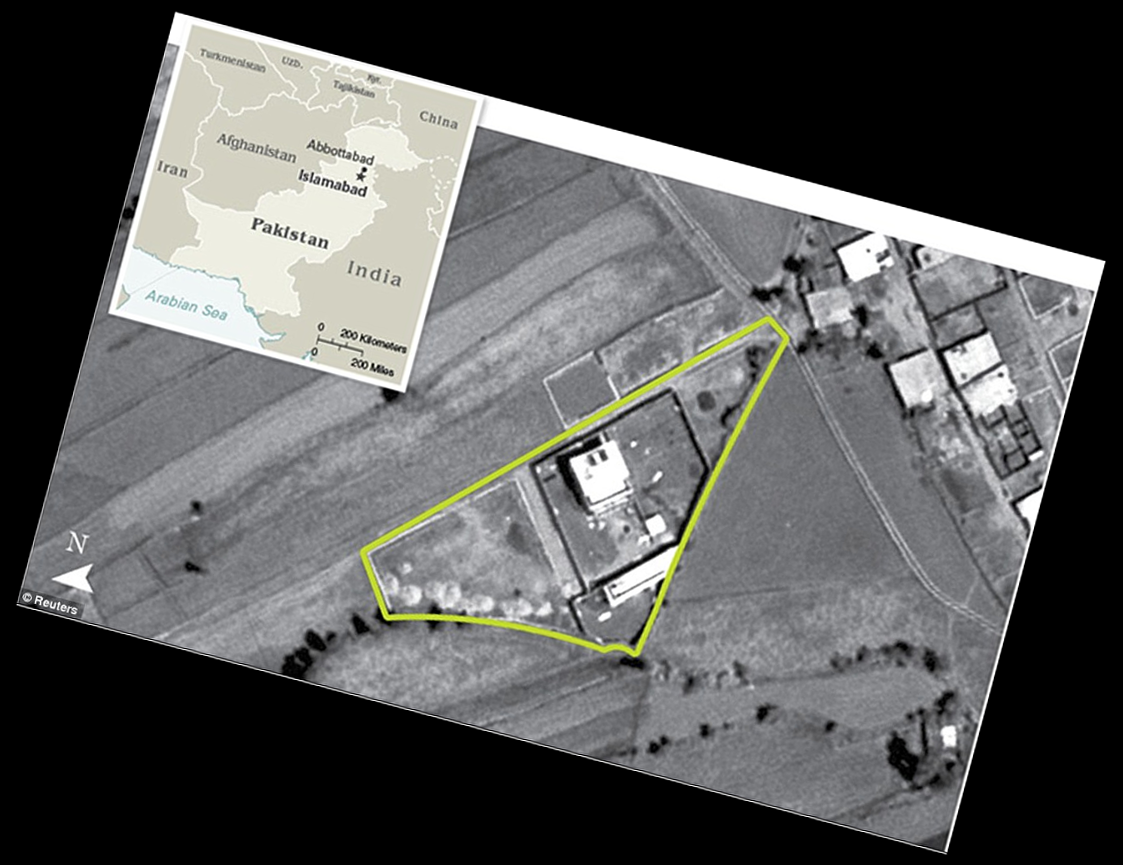 Funny how news organizations are so human.

So the pictures were coming in, first from GEO Television and then from Aljazeera and others. And the next day, still just the 3rd of May in Los Angeles, we were treated by Google to another update on Google Earth. Have a look. Imagery Date 5/8/2010.

But that same day, we got the DOD version, actually done this year and showing the lot pre-construction. Here it is. 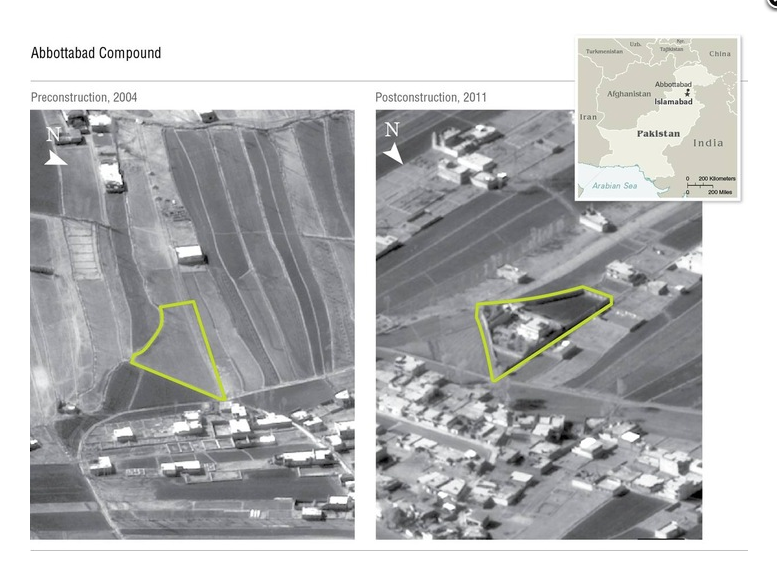 The Official Story, maybe we should take them at their word this time.

14 Responses to The maps, they are a changin’